Cause of abbreviations on Yu-gi-oh! cards

Why are certain Yu-gi-oh! cards abbreviated in unusual and inconsistent ways?

A number of Yu-gi-oh! cards have unusual, inconsistent abbreviations in their card names that stand out.

Perhaps the most notable is the Lord of D.: 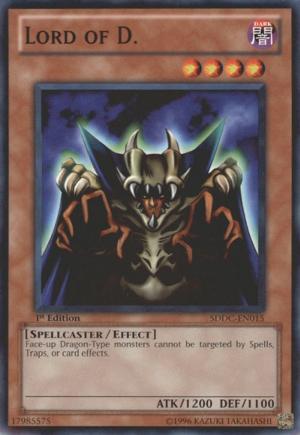 This card abbreviates the word which is clearly supposed to represent "dragon" without apparent reason for doing so. The word is definitely not too long to fit - other card names can testify to that. The word itself is also not taboo - it appears in the names of other cards, as well as in it's own body text in describing a creature type (Dragon-Type, a core creature type).

Speaking of dragons, another example comes in the form of the Red Eyes B. Dragon. Here, the word "black" has been abbreviated. Again, proof that the name wouldn't have been too long otherwise can be seen by comparing it to the Blue Eyes White Dragon, which is slightly longer in its first word and identical in length in the third word in question. The name "Red-Eyes Black Dragon" is also spoken aloud prominently in the show, as it is a trademark card held by main character Joey Wheeler.

Perhaps the most awkward is the card, "The A. Forces." In this particular case, I can not even tell what this letter stands for despite analyzing the context (perhaps its the same word as the one found here? Joking, of course, but that would actually give it a reason to be censored!)

What is the reasoning behind this haphazard abbreviating of seemingly random words on these cards?

As strange as it sometimes comes through, Yu-Gi-Oh! Cards are commonly being censored for the western market, not only visually, but also in text. One prominent example is the renaming of "Magic Cards" to "Spell Cards" shortly after the release of the third set "Magic Ruler", which was released as "Spell Ruler" in Europe. This renaming is probably due to Wizards of the Coast complaining about the similarity to their own game's name ("Magic the Gathering") and possibly even threatening legal action.

Notably, Konami was very strict in removing sexual, cultural, religious and political references as much as possible, but also several cases of copyright driven censoring (like the Magic thing mentioned above). Examples include

There are many, many more examples.

As for your examples:

Great question! Unfortunately, I don't have a complete answer. According to the Yu-Gi-Oh! Wikia:

Some cards have been released in the TCG with shortened or abbreviated names. A major reason for this was that the names were too long unabbreviated, and Upper Deck Entertainment had not yet figured out the smaller card name font for long names, but other reasons include stylistic choices and occasionally because the card name was also abbreviated in the OCG.

Not an entirely satisfactory explanation, particularly for card names such as Lord of D. which as you say, clearly fit on the card. I'm guessing in these cases it's just a somewhat bizarre stylistic choice (it is anime, after all...).

As a side note, "The A. Forces" is short for "The Allied Forces".

Not the answer you're looking for? Browse other questions tagged yu-gi-oh .

3
Banishing Spell Cards from the graveyard
2
Does Juragedo always cause a replay?
4
Why do cards miss their timing?
7
Why are there illegal cards?
3
In Yu-Gi-Oh, when you banish cards from the field, can you banish spell and trap cards in addition to monster cards?
3
Banishing cards from the graveyard
2
Find Spell cards self banish or cards banish spell in grave
3
Are there any cards in Yu-Gi-Oh that let me interact with face-down banished cards?
1
Strange old cards