What is e3 Feedback Implants good for?

When would I need this card? With most icebreakers, it's 1 cred to break a subroutine. 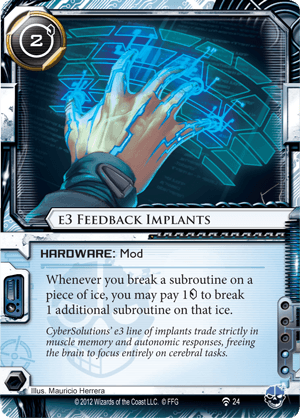 As of right now, there are two situations in which E3 feedback implants are useful.

The second use is against bioroid ice. Bioroid ice subroutines can be broken by spending a click. So with E3 feedback implants any bioroid ice can be bypassed by paying 1 click + 1 cred/remaining subroutine. Which makes things like Janus only cost 1 click + 3 creds.

If there are things added in the future that allow breaking subroutines via non-icebreaker methods, E3 implants would also be useful in those situations.

EDIT: There was discussion about whether or not E3 feedback implants could be used as the triggering condition for itself, so here's a link to a thread on BoardGameGeek where this got answered. (It does trigger itself) http://boardgamegeek.com/thread/910289/e3-feedback-implant-official-answer

As more cards come out, new synergies will obviously appear, but I think its best use at the moment is against some of the incredibly tough Haas-Bioroid ice which allow the runner to spend clicks to break subroutines.

The rulings on e3 Feedback Implants from the Official FAQ:

e3 Feedback Implants triggers itself, so the Runner can break all subroutines on a bioroid ice by paying credits after spending a single click.

Here are some situations where e3 Feedback Implants can really be useful.

13
How do Data Raven and Chum interact?
3
When can I use Cyberfeeder's recurring credit with icebreakers?
9
Oversight AI Woodcutter behind a Chum
3
Why is Femme Fatale so expensive to install?
2
How do "Run" Events interact with effects that change the server you're running on?
4
Tyr's Hand - Rule Check
7
When Data mine is triggered, if the runner survives this ice, can (s)he/other still continue?
4
Trashing two birds with one stone
3
Where should I place tokens via Builder resolved from another server?
2
Breaking ICE - exactly how should strength be treated?