Is the 4-player variant unbalanced? Is there a fix?

In Game of Thrones (second edition):

I have marveled at the balancing put into this game, specifically for 3-player games, where the whole south of the map is blocked, forcing the game to stay in the north, and thus creating a very good balance between the 3-players.

The 5-player variant is also very well balanced. Including all of the map in the game with no blocked territories, the only difference is that house Martell is gone which releases some tension on the board so the game is simply delayed a bit, but still very balanced (IMHO).

And the 6-player version (the recommended) is obviously balanced, as it is the main design of the game.

However, I feel that the 4-player version of the game is extremely unbalanced compared to the other variants.

First of all, there are no blocked territories, creating a huge empty space in the south, the only thing to hinder a rush are neutral troops which can be easily defeated after the first few turns.

House Baratheon is almost unhindered in its capture of all of the south unless Stark moves in aggressively or Baratheon moves inland or north, which barely happens when the south is so seductive.

House Lannister can also grab for the south, but much keep care of Greyjoy as they have easy access to the lands as well. As long as Lannister leaves the Riverlands and goes south, they are pretty safe from Greyjoy for the start of the game.

House Greyjoy, the extra house which makes the difference from 3 to 4 players, is stuck between Lannister and Stark, but with the empty south, and both Baratheon and Lannister moving down the board, Greyjoy is pretty free to take the Riverlands, unless Stark moves in, which would weaken both players and block their progress, and let Lannister or Baratheon get a big lead at the start.

House Stark has a great time of this board, being able to see what the other players are doing, and where they are focusing, and then adapting. Being able to go either direction on the board, and also into the Riverlands, they are in a great situation on the 4-player board and it is very difficult to do anything to them.

The above are just a few examples of some of the things I feel are wrong in the balance of the 4-player game.

I would like to know if others have suggestions on how to improve the balance with house-rules, or if I am overlooking something, to please inform me as to how it actually is balanced.

The 4-player game is extremely unbalanced.

Greyjoys need to play fast and aggressive with building a navy to stay in the game to begin with, in a 4-player game that need is greatly expanded; if they don't get an army down south, they'll never be able to be a real competitor.

(My group is current on hiatus from playing this game as the last game we played I (as my first time as the Lannisters) took over Ironman's Bay, and stranded the Greyjoy player for the rest of the game, continually raiding his Consolidate Power so he couldn't bid on the Influence Tracks, and kept him unable to place a single starred order the entire game.)

5-player has similar Greyjoy issues, but the inclusion of Tyrell (starting in the completely undefended south) usually makes a huge advantage for the lucky 5th player.

Generally speaking, I never used to play when I don't have 3 or 6 players, however, one of my friends stumbled upon this:

Using this overlay, and the rules that come with it (no Martells, a strength 5 neutral token on Sunspear, take out Greyjoy and make Pyke unclaimable with only 4 players), we were able to have quite a few successful games.

Rumble in the South puts everybody deep in awesome. From boardgamegeek:

4 Players: Rumble in the South

In this variant, Stark and Greyjoy are unplayable and their lands are impassable. The impassable regions thus include: Bay of Ice, Flint's Finger, Ironman's Bay, Seagard, The Mountains of the Moon and The Narrow Sea. This variant is excellent at creating a true 4-way battle with shifting alliances! However I tend to make the win condition only 6 castles instead of 7 to speed up the game.

After a full 6-player game, this is my favorite way to play. Boardgamegeek also has 3 other game variants:

4 Players: Struggle in the North

In this variant, Tyrell and Martell are both unplayable and their lands are impassable. The impassable lands start at: Highgarden, The Reach, The Boneway, Storms End and includes all lands south of there. Interestingly, this variant leaves the oceans around the southern end of the continent open, and I recommend The Arbor remain in the game as well.

In this variant, Baratheon is unplayable and Dragonstone is impassable. But all other areas on the board are fair game. I like this variant since everyone else, except Greyjoy really, has a shot at taking King's Landing first.

5 Players: King in the North

Despite its name, this variant has Stark as the unplayable house, with their lands and the Arryn's lands impassable. This includes: Bay of Ice, Moat Calin, The Twins, The Mountains of the Moon and The Narrow Sea. I don't like this variant as much since Greyjoy goes at Lannister, and Tyrell tends to go at Martell, leading to a relatively easy Baratheon victory unless Tyrell and Martell team up on Baratheon. But it's still better than the neutral armies in the rules!

None of the 5-player games are nearly that interesting, so what we do with 5-player games is simply add +1 to all Martell neutral tokens; it seems to be enough to slow the onslaught of destruction set on by the Tyrells. At least enough for the Lannisters to join into the fun. 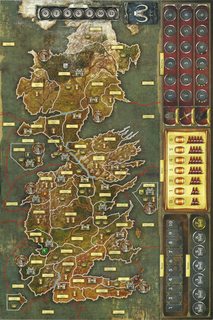 I recently got the game. Me and my friend (yes, only the two of us) played the game twice. We set up a 4-player game and took 2 houses each. We went by the rulebook and left out Martell and Tyrell. In the first game, we learned the rules and what-not. I chose Stark and Baratheon. I was a little late picking up, so my friend won using Lannister and Greyjoy. In the second game, I chose Baratheon and Lannister. I held off the middle part of the map thanks to Lannister while I conquered the neutral cities of Martell with Baratheon. That was a walk in the park.

In a 4-player game, I think the game is really unbalanced when you consider how it's so easy to stay away from the north and conquer south when you play as Baratheon. Of course, considering that Lannister stays away from you. And they will, because they have to deal with Greyjoy and Stark. It's a good thing I found these variations. When playing with 2 people, I can use Struggle in the North. That's very good.

i have found that even though the standard four player game is rather unbalanced (at least it seems so, when compared to the other variants), however, if you replace greyjoy with tyrell the game is more balanced. that's how my friends and i have played it... we decided to also make pike impassable... it may or may not be necessary, but i think it adds a lot more balance to the game, as tyrell and baratheon focus more on the south, and stark and lannister focus more on the north/center, and it just makes the game as a whole a lot more enjoyable

i'd believe it wouldnt be too hard just either spreading more evenly the factions or, take all the closest bunched-together factions for a massive free for all.

Or actually using diplomacy with stark... "guys, bash yourselves up as you want, i'm going to war to the south, i'll leave you guys alone, you dont come closer to me or we all end up as slave fodder for the other guy"

or you could always 3way rush the opponent in the south , one goes mainland, and the 2 others follow the seas down and siege the sides. (so long as no one disturbs the shipping lines, all 3 could potentially lay waste to the southerner player.

7
Is house Baratheon meant to be able to expand this quickly?
2
When playing the Rumble in the South variant, what adjustments should be made to the neutral forts?

11
Can routed ships retreat to port in the same sea area?
7
What is the value of the Iron Throne track?
7
Is house Baratheon meant to be able to expand this quickly?
7
What is done with discarded Tides of Battle cards?
2
When playing the Rumble in the South variant, what adjustments should be made to the neutral forts?
2
A Game of Thrones Feast breaking ties for objectives
6
How to fix very high impact of losing players last turn
4
How to open with Baratheon at Game of Thrones Board Game?
2
Mother of Dragons, Walder Frey, and Vassals
3
Are armies supposed to be limited by available plastic units?