Can I flicker Aurelia to get more than two attack phases? 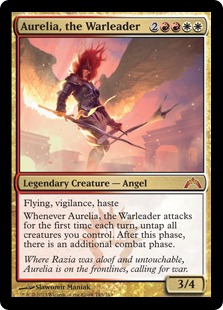 Whenever Aurelia, the Warleader attacks for the first time each turn, untap all creatures you control. After this phase, there is an additional combat phase.

If I attack with Aurelia once, then flicker her (e.g. with Acrobatic Maneuver), will her second attack also count as "attacks for the first time each turn," thereby allowing me a third?

There are two completely separate Aurelia, the Warleader in the scenario.

The first attacked in the first Combat Phase before being removed from the battlefield using Acrobatic Maneuver.

The second was placed on the battlefield by the blinking ability and went on to attack in the second Combat Phase.

It's of no relevance that the same physical card represents both Angels.

400.7. An object that moves from one zone to another becomes a new object with no memory of, or relation to, its previous existence. [...]

When a card refers to itself by name, it means "this object".

As such, the post-blinking Angel first attacks in the second Combat Phase, triggering the creation of a third.

3
How to effectively have three (3) combat phases with Aurelia, the Warleader + Legion's Initiative

8
Does first strike damage occur before normal damage?
4
Does Exalted still apply if additional creatures are later included?
4
Is there a term for defensive effects that only/primarily function for attacking creatures?
6
Gideon Jura vs an opponent with multiple combat phases
4
How does combat damage work with Party Crasher if he is both Attacking and Blocking simultaneously?
8
How does Over My Dead Bodies interact with combat-related abilities of creature cards in my graveyard?
3
How to effectively have three (3) combat phases with Aurelia, the Warleader + Legion's Initiative
4
How do multiple Raging Rivers interact?
5
What exactly is "each combat"?
22
Off-turn Basri Ket and Blocking