Storage Wars had an episode in 2012 where Daryl Sheets finds a bunch of MtG cards, some loose, some bindered. They sell the entire lot at Frank and Sons Collectible Show for $700, basically the price of the three cards below. (If you read online, you can find that all the other cards were commons/uncommons ) 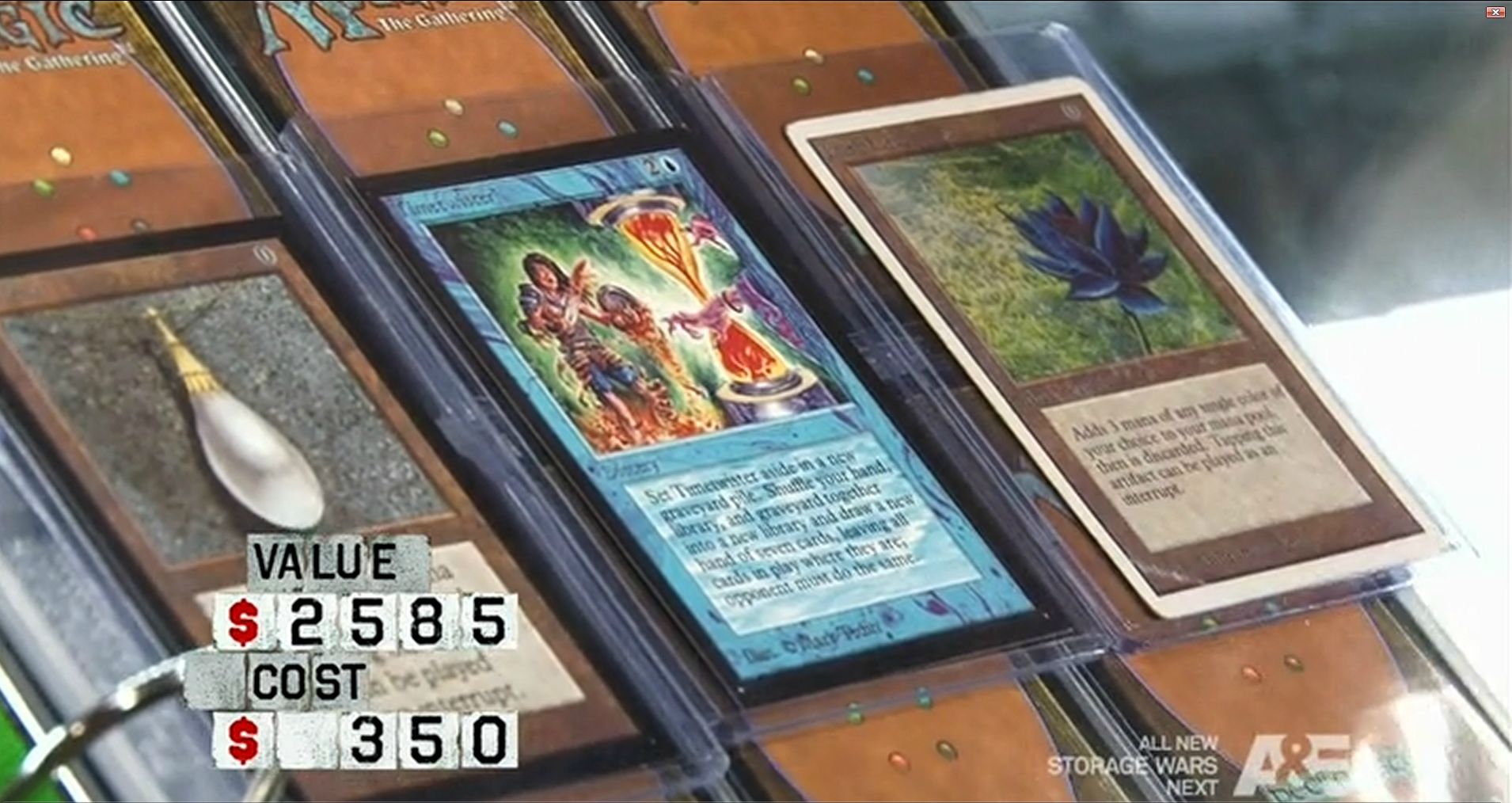 Question: What are these cards really worth in their present condition? (And did Daryl Sheets get ripped off? )

Google search link for this episode

It's not really fair to judge if he got a decent price or not based just on retail value. Just like trading in a car, you usually could have gotten more money selling it yourself, but the additional time requirements and overall hassle do not always make economic sense for your situation. I need a new car now, not after I eventually find a buyer for my old one, Darrel needs to get whatever value he can out of his locker before the next episode so he can buy another locker, not when he eventually finds a Magic collector interested in that card.

So since he knowingly chose to turn them in to a dealer instead of attempt to retail them himself, it's more fair to look at buy-list prices than retail prices. As of May 2013 Star City Games is offering 1000USD for a Mint Condition Unlimited Black Lotus (white-bordered printing), Troll and Toad is offering 1130USD. (Just two of the largest and best known Internet retailers, chosen arbitrarily by me.)

Now the Lotus in that picture appears to have a rip in the lower left corner, which makes it basically worthless to collectors (who wouldn't usually be all that interested in the white-bordered printing anyway). It only has whatever value it has to people who actually want to use it while playing the game. Ever tried to sell a comic book with torn cover? More or less the same. I am no professional dealer, but I think giving around half the mint price for a torn card is very fair.

The other two have square corners, meaning they are from a special set of printings known as the "Collector's Edition," which are not considered "real" Magic cards and cannot be used in official tournaments. They have some street value because some people like to have the "almost real" version when playing the game in formats where fake cards are allowed. The current buy list value for both combined is $65 in May 2013.

If the card is not torn and is only creased, then yes he probably could have eventually done a bit better by retailing it, but we're back to the used car analogy. It's also arguably even harder to move that product than a car if you're not already an established retailer. A retailer like Star City Games can sell a white-border Lotus for $1500 online because Ben Bleiweiss is a household name in the collector community and people trust him not to sell them a counterfeit card. If a seller with no history of moving Magic cards at all tossed a damaged Black Lotus up on eBay expecting people to be willing to pay anything resembling retail for it, they will find themselves relisting that auction for a very long time.