How can I effectively use the Coppersmith?

I've been playing Dominion with the base + Intrigue sets for a while now, and one of the cards that I have trouble wrapping my mind around is the Coppersmith.

In theory, it seems like a great card - it allows you to make all of your Coppers into Silvers, and in some cases - even Gold. However, I have yet to build a deck during a game that manages to use it effectively. Usually, in order to pull one or two of those with a nice amount of coppers, I need to create a deck that relies heavily on +cards/+actions chains, and the Coppersmith only begins to affect the game too late for it to be of any use.

So... how can this card be effectively used? 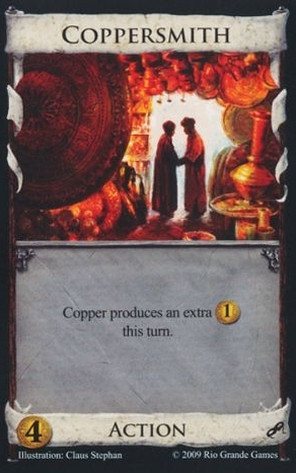 Here is a chart showing how 1 coppersmith can accelerate your early game. I've compared it to Smithy, and "Big Money" (A base strategy of buying only silver/gold/provinces which is actually fairly strong)

This shows a few things

Is buying a province on turn 3 a good move? Maybe not, but it could be. My point is that if you buy coppersmith, you stand a higher chance of getting an early gold. This advantage will carry over to future turns. Coppersmith will help you hit the financial high points of $6 and $8 more often, while avoiding $5 and especially $7.

Every set of 10 cards in Dominion is different. Coppersmith won't always be a great card, but it can be used to great effect. Try playing it with wishing well!

In addition to the odds laid out by Pat Ludwig, there are some cards that will make Coppersmith more or less useful.

Cards that could make Coppersmith more useful. Actions are terminal unless otherwise noted:

Cards that could help or hurt:

The power of this card is in the early game. Buy it on your first or second turn to get some extra buying power early on before you have a more Silver- and Gold-heavy deck. This can get you a Gold as early as your third or fourth turn.

You'll probably want to try to trash it later, since it provides little benefit after mid-game or so.

I think that you should basically ignore the coppersmith unless there is a really good way to draw a lot of coppers and still have actions left. It only pays off if you have more than 2 coppers in hand. In practice, this means I will only consider it if there is a tactician or apothecary. In my opinion, coppersmith is the worst 4 cost card in the game.

Here's why: It's only sometimes better than silver early, and late game, it's much worse.

Assume a standard 5 card hand, with a deck of mostly coppers, some estates, and a coppersmith: If you buy a coppersmith instead of a silver early game, it will give you likely anywhere from +1 to +4 coins. If it gives you +4 coins (meaning you have $8), it's probably not better than +3 or, since an early gold is almost always better than an early province. If it had been a silver, you'd still hit $6, and you can still buy that valuable $6. If it gives you +3, that's pretty nice, you can get an early gold or other useful 6 cost card, and no other card could fill it's particular role. If it gives you +2, you were better off with buying a silver, since the silver does just as well there, and is much better late game.

Not mentioned thus far, but an important aspect of this card: it stacks. You need extra actions, of course - City, Laboratory, Worker's Village, etc. - but playing two Coppersmiths in a turn can be very strong.

Seems like what they call in Magic design a "skill-testing" card to me. For the price of this card, you could have bought a Silver instead. A Silver will be better than a Coppersmith in your hand unless you have, what, 3 Coppers? Crucially, a Silver won't cost you an action.

Sure, there are probably some scenarios people can come up with where you draw a ton of cards including Coppers, and extra actions, and Coppersmiths, and you generate a fortune. However! If you can assemble that kind of drawing power, you could probably have assembled a different, better kind of deck instead. Simply put, the Coppersmith is going to pay off once in a blue moon, when you draw Coppersmith plus four Copper in the same hand and buy yourself a Province. The rest of the time it seems more likely to sit around and clog up your deck.

Do yourself a favour and buy a Silver instead!

I think the only circumstance where a Coppersmith will be likely to be better than a silver is if you're stuffing your deck with lots of copper, playing a lot of +Buy cards and using all the spare buys to get copper. A Gardens / Council Room kind of strategy might appreciate a Coppersmith or two. I've never seen anyone put lots of Laboratory together with +Buys for Gardens and copper, but if someone did that, then that could work with Coppersmith.

2
What is the best strategy for Coppersmith in Dominion?
14
Maxing out your buys in early Dominion
4
Strategies and kingdom cards for a strong opening in Dominion?

26
Can I use a reaction card in response to Minion being used for +2 coins?
9
Proper use of Dominion card Upgrade
12
Correct/Recommended use of Masquerade in Dominion: Intrigue
7
How can I make Dominion play better with 5+ players?
12
How does Mining Village's extra effect work in Dominion?
9
Using the Baron
4
Dominion - Saboteur use
11
How are Swindler's effects resolved in a multiplayer game?
7
How do I use the Dominion & Dominion Intrigue Update Packs?