Keeping track of many independent variables on a physical board?

I have a large number of independent variables which I would like to represent on a physical game board. One idea I had was to implement these using rotating disks, a little like the metal spinning mechanism used to select numbers on some types of lock.

Would it be possible to implement these spinning mechanisms on a physical board game as smaller plastic spinning disks? Have any games made use of this idea? Three or four of them would have to fit on a little square with many of these little squares on the board.

Alternatively, is there some other mechanism that would solve the problem more elegantly?

Here is a picture of what I am considering implementing. However I am not sure of the feasibility of adding about a hundred of them to a board.

One solution I've seen to this is a cardboard disk with a hole cut out; the disk can be rotated to reveal any of several items below. Battlestar Galactica does this to track resources; Chaos in the Old World tracks both advancement towards victory and threat. 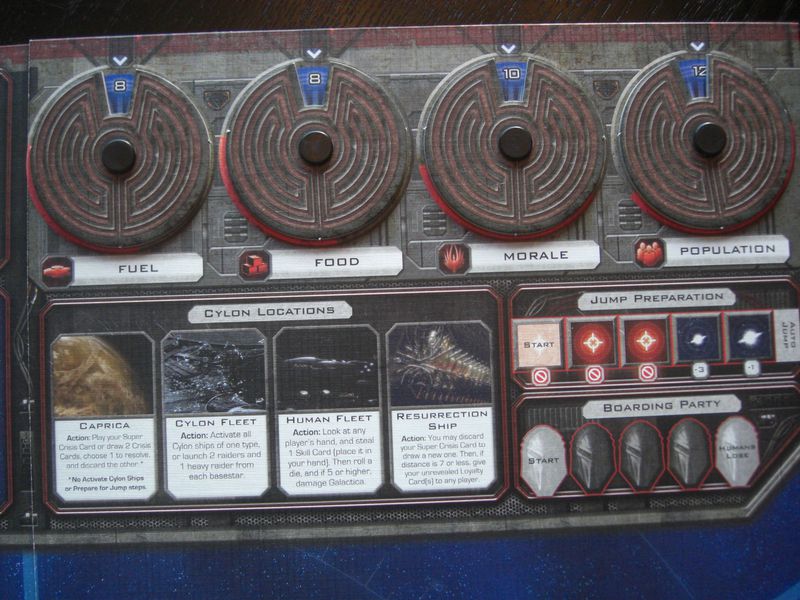 Using 100 moving-parts dials sounds problematic. It would be a huge effort to set up, expensive to produce, and there's a lot of pieces to break. Assuming that each number to be tracked is small, another solution would be a six-sided die for each number, or using a few counters in a specified location.

It's not uncommon to use dice to track values, turning them to the appropriate side.

For instance, in Shadows over Camelot, knights use D6s to track their health in this way and for no other reason (i.e. they're never rolled).

If you need to track higher numbers, consider using D20s or even two D10s to get numbers from 00 to 99.

The advantage with this is that they don't take up board real estate and they're easy to understand for new players. A downside might be that they're easy to knock over, but most board games suffer from knocking the table.

Dials have been used on a number of board games.

They have usually been used on the main board as randomizers; in this role, the archetypical ones are Life and Nuclear War. Life uses a plastic base affixed to the board and a plastic wheel setting on a pin in the base, which is spun. In Nuclear War, its a plastic arrow connected to a hub, and the hub passes through a hole on the cardstock display.

The other common mode is as a choice indicator. The most notable use being Avalon Hill's Dune boardgame, but several other designer games make use of them. Almost all of these use a pair of cardboard wheels with a plastic hub, sometimes 1 piece, sometimes 2 pieces, separate from the main board.

Rarely used, but I've seen it done, is a cardboard disk with a hub which drops into a hole drilled into the board. Chaos in the old world does this with 4 dials.

Another mode is just a marker which sits on a dial printed on the board. Supremacy, Imperial, and a many others use variations on this, either linear as with Supremacy, or circular as with Imperial. Note that this allows "overloading" a given track by having multiple markers on the same track, as with Supremacy using a black disk on the player board for Nukes and L-Stars, and colored disks for Neutron Bombs (on the Nukes track) and K-Sats (on the L-Stars Track). One of the optional rules is to use colored markers for the action type bids, placing them on the turn outline as if it were a track.

So, yes, there are multiple ways to create and use pseudo-lock-dial displays, and spiners. Plastic hub and arrow assemblies are standard parts commercially available in bulk. Plastic hubs are available as well. Bindery Screw Posts can be purchased as well, which can be used with cardboard or plastic wheels to bind them to cardboard boards.

Depending on how your board is arranged, you could try using stiff rectangular strips of numbers instead of circles, which might be easier to make. You'd need a big enough 'window' that players with large fingers can easily slide the strip up and down (or you could just make people use a pencil eraser to push the strip -- style the pencil and now you have a cheap, nifty component!).

If you're OK with just a two-digit number, a pair of disks or strips could work -- the left one represents the 10's place, and the right one the 1's place.

If you're still prototyping game mechanics, the dice-based suggestions are great, but there's definitely an aesthetic difference between dice sitting on a board and numbers embedded in it, especially if you have other objects on the board. Good luck!

You could just write the numbers on the board. Wits and Wagers gives each player a small plasticized card and a white board marker, you could have similar built in to the board. If there are different types of numbers, you could use different colors as well as different sections of the whiteboard to keep things clear.

This is probably a more expensive option, but it would be quite space-efficient. A 2"x1" rectangle should provide plenty of space for three 2-digit numbers.

These are some nice counting devices that I use. They could probably do a custom sticker for whatever variable you are tracking.

It soulds like you want to mark several values per each space on the board. One of cheapest solutions that works both in tight space and with arbitrary values is to simply use counters. Depending on what exactly you're trying to accomplish it might get a bit fiddly, but for the most part it should be perfectly manageable. Twilight Struggle is a good example: http://dicehateme.com/wp-content/uploads/2010/12/ussr.jpg