Is there a 0-9 number wheel / plastic decagon thing available for board game construction?

I previously asked a question about possible techniques for tracking multiple variables. Here I am asking specifically about the feasibility of making a board which has little rotating decagons (about 25-50 of them), each of which cover the values 0-9, just like this picture or this one.

Is there anywhere I can buy tiny decagon plastic rings like the first picture, to implant into a board with a little depth, that can be then be turned?

You're looking for something like this? MTG Cammander's Arsenal 100hp Spindown

These are very expensive, not sure how you'd get them cheaper. I've done a little Googling and come up with nothing. Perhaps you could get them 3D printed by Shapeways

In any case, I'd be concerned about how expensive these are, if you want to implement them across a game you want to sell it will become very prohibitive, and even if you managed to fund the release the game would have to be so expensive it would be hard to sell.

I'm concerned that even if you can make these work the board will be very chunky, making for bigger boxes and further logistical issues. Here's another idea I just had: 3 disks of varying sizes, made of cardboard, with numbers printed on them, that can be pinned flat to the tile: 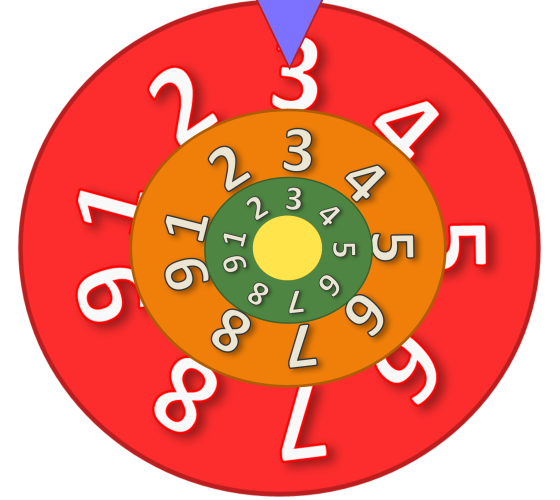 This would take up less space and allow other things to be placed on the tile, as well as being vastly cheaper. The player would just turn the wheels to align with the arrow (perhaps better to have the arrow on the left hand side)

The Mississippi Queen is a board game that does almost exactly what you're asking for: dials, oriented vertically, that can be rotated.

This image shows the dials in action: hexagonal disks that show a number from 0 to 5 along the edge. The dials can be taken out of the steamboats, and can also be rotated in place; if you're not specifically trying to rotate them, they hold their position just fine. There are two plastic pieces for each dial: the dial, and the place for it to sit. (The dials are just sitting loosely in a cup; there's no axle holding them in place.) In Mississippi Queen, of course, there are two dials per steamboat, but that's a minor detail.

Of course, this is a more expensive implementation than all of the other answers, and will drive up the cost of producing the game, but it's closest to your original image.

8
Keeping track of many independent variables on a physical board?

9
Resolving Diplomatic actions in a RISK-style board game
19
Which computer board game designer works best for card games?
23
What's the easiest way to prototype a board game design?
12
Board game design dictionary
29
What makes a cooperative board game actually a game?
8
Keeping track of many independent variables on a physical board?
3
Picking colors for an abstract game (game design)
3
Publishing a board game with an existing game company
1
Backgammon board for 3 players