Can someone counter a creature ability with a counter target creature?

If I activate a creature ability that puts creatures on the battlefield, can my opponet counter it with a counter target creature spell?

No, you can't counter an ability with an effect that says counter target spell. You can only counter a spell

One of the reasons why people play aether vial, because you can't counter creatures put into play with aether vial

You need to pay attention to the wording of the ability. Because if the ability says that you can "cast" the creature such as Garruk's Horde, than it does take the form of spell, and can therefore be countered.

But if the ability says to put it onto the battlefield than it's not a spell, and can't be countered

No, for the reasons Sam cited. But he could probably counter it with a spell like this, if he really wanted to: 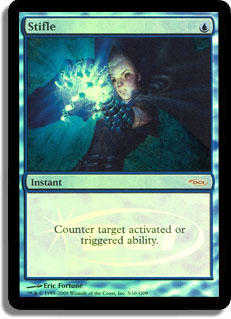 26
In Magic, can an ability target a permanent that is being sacrificed as part of that ability's activation cost?
11
Can I target an indestructible creature with a 'destroy target creature' spell?
4
Can I tap fewer than 7 creatures with Lullmage Mentor?
8
How can a Morph ability counter split second spells?
6
Does “target Merfolk” imply “target Merfolk creature”?
4
Can I copy a counter spell to then counter said counter?
4
Can Zombify target a creature card that isn't in the graveyard?
3
Killian, Ink Duelist; Target “Creature”