When would I use Leyline Phantom?

I'm a relatively new MtG player, and among my first batch of cards was Leyline Phantom: 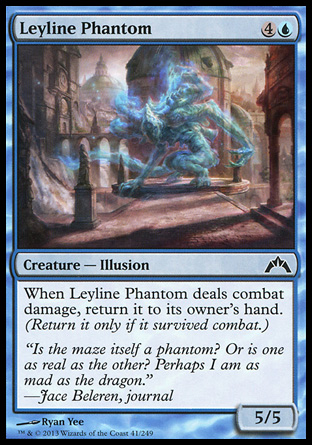 At first I wondered what I'd do with a card that might return to my hand regularly. Is it a relatively cheap source of power and toughness at a trade-off? I figured this would be mainly used for triggering various effects, but I had no idea what they were until yesterday. It would work very well in at least these two situations:

Now I'm wondering what other uses for it I'm missing, and whether there's even more to the above two points than what I've mentioned.

How can I take advantage of Leyline Phantom?

You've pretty much summed it up yourself. While you probably would not put Leyline Phantom in a constructed deck, it saw a fair amount of play in limited, since it both has a pretty big body for the cost and has various synergies with a few other cards in the same limited environment.

If you were running a Blue and Green (Simic) deck featuring creatures with Evolve (like Experiment One or Gyre Sage), it could be very beneficial to cast Leyline Phantom multiple times, as the combination of a high power/toughness, plus a (relatively) low casting cost would let you trigger Evolve several times.