City card and predicting when Supply piles will run low

This card kind of has me stumped. In my experience, the vast majority of games deplete the Province or Colony pile before any other, ending the game. Which means in most circumstances, this card is basically an overpriced Village, which isn't a very strong card to begin with.

It seems to me the key is knowing when Supply piles are likely to run low. Are there any things to look for in the setup of 10 Kingdom cards to help predict when this might happen? Or are you better off waiting until it actually does happen before investing in this card? 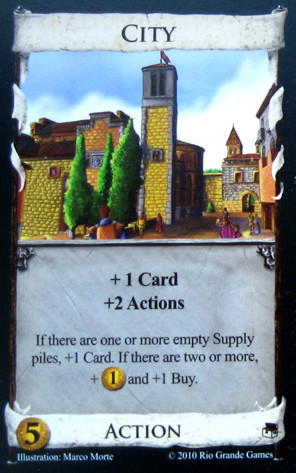 More supply piles tend to go in 5 or 6 player games.

Cards that synergize with themselves tend to get bought out quickly - like Caravan, Treasure Map, and Laboratory. Extra buys also seem to increase the rate at which Kingdom cards get bought out.

Terminal actions (ones that do not give you +1 Action) tend to get bought less frequently, as each player would only consider 1-2 copies anyway. It seems lower cost cards (2 and 3) aren't bought out very much. 4-5 costs appear to go fastest.

I have noticed City itself is frequently the first one to get bought out if any will, and that immediately boosts all of them. Generally I tend to wait on City until I notice people are grabbing Kingdom cards, but I also generally lose to the guy who bought 5 of them.

Or are you better off waiting until it actually does happen before investing in this card?

No, you're not better off. If you're going to invest in Cities, waiting for a pile to empty first is too slow.

If you can load up on Cities and run two piles out, you'll dominate. I generally do go for cities. The most important rule for cities is: if you're not the only one buying cities, don't buy the last one. In a 4-player game, I wouldn't buy either of the last two. Don't empty any piles unless you're confident of your lead and of ending the game soon. When a player empties the city pile, it greatly helps the next player with cities, and you don't want to give anyone else head start. Conversely, if you can manage to gain the last card in a pil on your turn which some actions left (perhaps with a Remodel-variant, though there are plenty of other options too), you get the head start if you can follow it up with a deck's worth of cities.

Whether or not to buy

Since they start as villages, Cities work really well with +cards. If there's no other good card draw, you can probably safely skip them. If there is good card draw, you definitely need to consider them. They'll be most valuable in a game where you think there will be a fair amount of time between a pile emptying and the end of the game, e.g. often when Platinum/Colony are in play. As others have pointed out, if there's another card in the set that's very popular in your play group, then you can expect it to sell out quickly, in which case Cities will activate quickly. An activated City is an excellent card for its cost, so you may want to largely ignore the other popular card and just focus on Cities.

Aside from the obvious curse/discard attacks to slow down a City strategy, use the piles. The City-player wants to kill 2 piles, and then have a few ridiculous turns before the game ends. A conter-city player wants to wear down piles evenly, so that as soon as one is killed, 2 others can be quickly killed depriving the City player of the chance to go off. This often isn't very hard. Pick a couple decent, non-terminal, cheap cards, which you should be able to buy more frequently than a City player can buy cities. Work in some points (a Duchy here and there goes a long way, or a Province if you get 8), so that when the game ends all of a sudden you're on top. Extra buy or gain cards help immensely with this (e.g. Ironworks, Bridge, Goons).

The general rule is to buy Cities early if you see cards or card sets that may cause piles to empty early.

Some such sets are:

There may be others, but they likely depend on the players you're playing against.

Maybe it's just the people I play with, but Cities are quite useful if there are cursing cards sitting around (e.g. Witch or Sea Hag). In my experience, especially with four players, Curse piles can empty pretty quickly, even if Provinces are going at a decent rate and no other pile is close to emptying. Of course, the best defence is a good offence, so considering the cost it may be more worth grabbing a Witch than a City, but nevertheless they can be worth a punt in a Curse-heavy game.

I can see some synergy with Treasure Map, which tends to disappear fast. 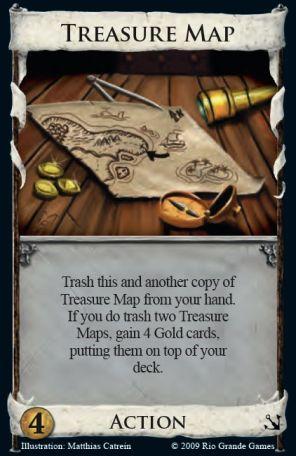 6
What happens when I play a Swindler and no cards with the same cost as the trashed card are in the kingdom set?
8
When Governor and Alchemy cards are in same game, how does gaining a card for trashed card work?
5
Black Market and game setup
2
Dominion: If a second supply pile is emptied while I am discarding for the Poacher, will I need to discard another card?