What is the special die with pictograms in Monopoly used for?

I think that I have a pretty standard version Monopoly, which looks exactly like I see in the Web 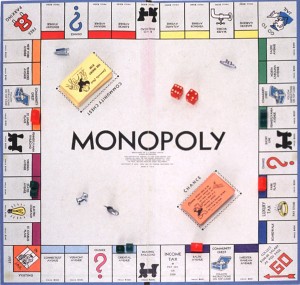 It has two white dice with values 1 to 6 and one red with values 1,2,3 and 3 pictures. I haven't seen any rules that say what to do with this second die.

update Once, I've got to know that this is called at "speed die", I have managed to find a nice picture of it: 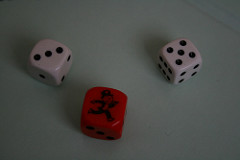 (The second picture has red regular dice instead of white like I have, but the special die is clearer.)

It appears you have the Championship Edition (or the Mega Edition or some other recent modified version), which includes a "speed die" (that third die) for speeding up the game, though it's definitely not part of the original game. There are two "bus" faces, and one "Mr. Monopoly" face.

I found these rules on Hasbro's site explaining how it works. The PDF was was reluctant to load for me, so I've quoted them here:

The die is known as the speed die

@Cascabel's answer has the rules from the championship edition for this die.

Mega Edition has different rules (especially surrounding the bus symbol). The mega edition rules are compatible with a regular monopoly set if you add 16 bus tickets. To make your own, you need 13 regular ones and 3 that say "all other tickets expire"; the two types of bus tickets should be indistinguishable when face-down. You could just use playing cards (taking 13 diamonds to be regular bus tickets and 3 spades to be the "all other tickets expire" tickets). Those rules are included below.

Regardless of which edition you are using, the speed die does make the game shorter, both in making properties get bought faster then in causing players to go bankrupt faster. It does also somewhat radically change late-game strategy due to the behavior of the Mr. Monopoly symbol once all properties are bought (move to the next property where you owe rent). This rule allows a player to augment the likelyhood of other players landing on a heavily developed property by buying a contiguous block of the preceding properties and mortgaging them all (thus making the developed one the next place another player would owe rent for a large chunk of the board). This also increases the value of railroads and utilities as potential "spoilers" in these runs of mortgaged properties.

THE DICE & HOW TO MOVE

On your turn, roll all THREE dice: the two white dice plus the new SPEED DIE.

• If pips appear on all three dice, simply move the total of all three.

• If you roll a Mr. Monopoly, you get a bonus move. First, move according to the white dice, do what you would normally do on that space; then move again to the next unowned property, which you may now buy. If you roll a Mr. Monopoly after all of the properties are owned, make a normal move according to the white dice, then move ahead to the first property on which you need to pay rent. If all other players properties are mortgaged, stay where you are.Note: An opponent can’t build or trade until your Mr. Monopoly move is completed.

• If you roll the Bus, first make a normal move according to the white dice, then decide to either take a BUS TICKET for later use(usually a good idea if any tickets are left in the deck) or move again to the nearest Chance/Community Chest space in front of your token

Refer only to the white dice when determining doubles. If doubles entitle you to roll again, you may use a Bus Ticket in place of rolling the dice. While in JAIL, roll only the two white dice (if you pay beforehand to get out, roll all three dice). If you roll TRIPLE 1’s, 2’s, or 3’s, move ahead to ANY space on the board. Do not roll again. You do not go to Jail if you’ve rolled doubles twice before rolling triples.

On any turn, you may choose to use a Bus Ticket (if you have any) instead of rolling the dice. If so, move forward to any space on the same side of the board. (Corners are the final space on each side, as well as the first space of the next side.) After using a Bus Ticket, give the Ticket to the Banker,it is out of play for the remainder of the game. (There are 16 tickets in all. When they are gone, they’re gone!) Watch out! When an “All Tickets Expire” card is drawn, all other Tickets in the hands of the players are lost to the bank (they’ve expired). If a Bus Ticket or Mr. Monopoly roll causes you to pass GO, collect $200 as usual. Note: All Bus Tickets should be revealed as collected and kept face up.

12
What are the order of actions in Monopoly?
5
What game is this die from?
23
What is the Monopoly M Symbol called?
3
How is the die for Cat Tower configured?
6
Monopoly (advanced) with speed die
6
What is this die for?
6
Does this have an official name and rule set?
12
Vintage Monopoly Game: What Year is it?
18
What does the "Appoiintment with the Street of Peace" Monopoly chance card mean?