MTG: Mutavault - how does it work?

How does this card work? How do you effectively play this card? What happens when it gets killed as a creature? What makes this card so expensive? 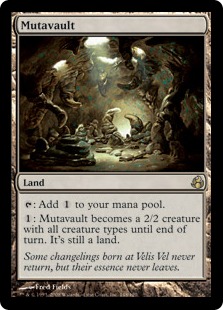 The card works in much the same way as other "Manland" type cards. You pay the activation cost, it becomes a 2/2 creature with all creature types, and for the rest of the turn it behaves exactly as if it was a 2/2 colourless Llanowar elves (NOTE: this includes summoning sickness. As long as its just a land you can tap it for mana as you could a regular land. If you turn it into a creature straight after playing it however, it has summoning sickness and you CANNOT tap it for mana).

You effectively play this card by utilising its attacking abilities at the right times, it is essentially a "free creature" at the cost (which can be a benefit) of turning it into a creature for 1 mana per turn.

The fact that it starts out and reverts to a land makes it safe from sorcery speed removal much of the time, the fact that it is all creature types makes it very potent in some tribal decks (legacy/modern merfolk), and the fact that it acts as a land until the point that you need it to be a creature makes your deck much more stable for casting expensive spells.

If it dies as a creature, it dies. Note that spells that say "target non-land permanent" can't target it, it may be a creature, but its still a land. It doesn't revert to being a land if it dies, it goes to the graveyard just like anything else.

The card is expensive because of it's proven track record, and it is a very powerful example of a man land due to its low activation cost and positive tribal interactions. Merfolk decks will commonly activate this as a 4/4 or 5/5 creature.

To add to the "why is this card so expensive," because of the draft structure at the time and the small size of the Morningtide expansion, fewer packs were opened than, say, in a large set that was drafted more consistently. (The format went from LOR-LOR-LOR to LOR-LOR-MOR and then to SHM-SHM-SHM.) This scarcity helped to raise the price.

Say you have a magic deck. In that deck you want to fit as many good spells as possible that takes you closer to winning but you also need enough mana sources to be able to cast those spells. Common numbers would be 37 spells, 23 lands. What Mutavault does is that some of your lands now also, apart from giving you mana, takes you closer to winning the game. So if you add 3 of those, you're suddenly up to 40 cards that help you win the game.

Mutavault does this at the reasonable cost of only being able to produce colorless mana.

Utility lands often rise in price because they can be included in so many different decks. Mutavault is colorless which makes it even easier to include.

30
Why is Skullclamp banned?
3
Double strike and Regeneration: Can the blocker die from combat after regeneration?
1
How does Rageblood Shaman's ability work?
1
Chandra, Pyromaster's ability and spells with x casting cost
1
MTG Gatherer Regular Expressions whitespace
8
What is a Conspiracy Card and how does it work?
3
How does this Interaction between Lifeline and Lethal Vapors work?
11
Does the Scythe of the Wretched + Crypt Rats combo really work, and how?
0
Matsu-Tribe Decoy vs. Trap Runner
2
When a card instructs an opponent to do something, how does that work in a multi-player game?