What is this tile-based game?

I bought a game at a thrift store because it was not used.

It consists of 104 ivory tiles. The tiles are numbered 1 to 13, with 2 sets in red and 2 in black; and then four more sets but these are numbered 1 to 11, with 2 sets in light blue and two with the numbers in yellow. Below each number is an indented circle. Also, there are two other tiles with a smiling moon face on it, one face is in red the other in black, these, too, have an indented circle on them. Included in the case that it came in were four "racks". It appears they are to hold the tiles.

I don't play games too much but I do like them. Does anyone have any idea what this game is?

It sounds like you have yourself a Rummikub set, but with the blue and yellow sets missing their 12s and 13s. The indented circles are there mainly for the benefit of distinguishing the 6 and the 9 from each other. The racks are used for resting your unplayed tiles on - played tiles are placed on the table between the players. 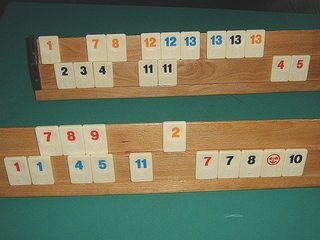 The components of Rummikub

That said, if you do have 104 tiles, you should only be missing two tiles, not eight! Have you counted correctly? Try laying them out and checking. 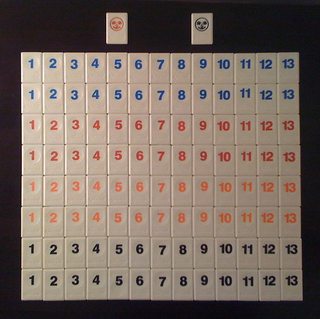 This game is called as "OKEY".