Name of this interesting variant of Tic-tac-toe?

A group of grad students and I regularly meet up at conferences. Often, we spend our coffee breaks between talks playing various suggested generalisations of common pen-and-paper games to see if we can find an interesting one. This has lead to some quite interesting games in the past such as connect 4 with changing gravity, and tic-tac-toe on more general surfaces (such as a cylinder and Klein bottle). A group favourite, which was suggested a few months ago seems to be an interesting variant of Ultimate Tic-tac-toe.

For want of a better name let us call it Spillage-tic-tac-toe or Spillage for short.

Before stating the rules I shall ask my question.

Is the game Spillage a well-known variant of Ultimate Tic-tac-toe? If it is, is there a reference to the game being solved in the literature? If it is not, can any insight into winning strategies be offered?

I'll now attempt to give the rules of Spillage. I apologise for not including any images with the rules (which would help to illustrate certain game states) and if anyone feels like editing the question with such illustrations, you are encouraged to do so.

We will label the 9 smaller 3x3 meta boards in the obvious way with the numbers 1 - 9 (using bold to indicate a meta square) reading from top-left to bottom-right, and the individual 81 squares by subscripts n_m to denote the m-th square in the n-th meta square. So for instance the four corner squares would be labelled 1_1, 3_3, 7_7, 9_9.

As usual, player O and player X alternate placing their respective symbols, O's and X's, on the board, with X going first, until a player wins or all available squares have been played in without a win (resulting in a draw).

There is no restriction to where a player may place their O/X (this is the first major deviation from Ultimate ttt). 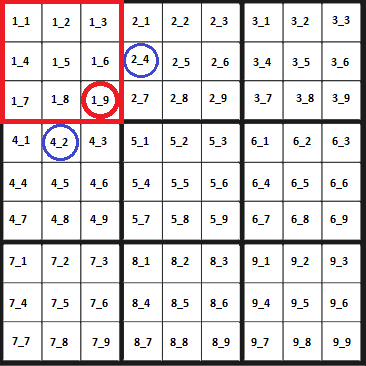 Once a meta square has been claimed, it can not be claimed by the other player. A player wins, when they claim a chain of three consecutive meta squares as in the usual tic-tac-toe. So, for instance if player O later claims 3 in the above scenario before X can win, then O has won the game.

BGG doesn't have any game with "Spillage" in the title. Looking at the Tic-Tac-Toe entry there is also no game that reimplements Tic-Tac-Toe which is the same as Spillage. There are a number of games which play some sort of meta-game of Tic-Tac-Toe in which there are nine 3x3 games being played and the object is to get 3 in a row on the meta-board. So all in all "Spillage" would seem to be as good a name as any.

I'd guess that the game is a first player win like the game Hex since having an extra position can't hurt.

Since it is a "new" game it won't have been solved. But writing a program to play would need a dept first approach with symmetry. The look ahead would seem to be fairly uncomplicated so I'd guess that a computer could either win or tie with a decent program.

Given that the human moves first I'm not sure that a human could out-play a computer on this. If such a winning strategy could be found for the first player then the game would just be a gigantic meta-Tic-Tac-Toe game of course.

Not the answer you're looking for? Browse other questions tagged identify-this-game tic-tac-toe .

37
What is the optimal strategy in Quantum Tic Tac Toe?
13
First modern Naughts and Crosses/Tic Tac Toe?
8
Looking for a specific variant of Tic-Tac-Toe
18
Is Ultimate Tic Tac Toe solved?
5
Identify 3D Tic Tac Toe type of game
11
Game (like tic-tac-toe, but with a hole in the middle) where players have to score by getting temples on tiles?
5
Winning strategy for NxN Tic-Tac-Toe
2
Strategy for Movable Tic Tac Toe