Does Progenitor Mimic create copies of itself even when it isn't a creature? 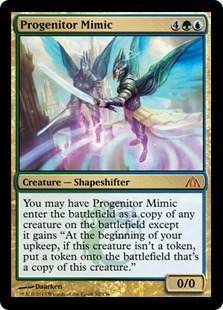 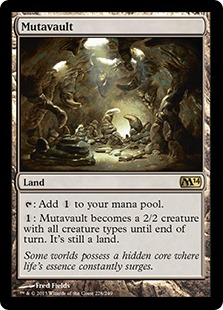 Progenitor Mimic can be cast as a copy of cards like Mutavault and Simic Keyrune whilst they're in their creature state. When it does so, it can become something other than a creature: a land, an artifact, etc.

However, its copy ability states:

At the beginning of your upkeep, if this creature isn't a token, put a token onto the battlefield that's a copy of this creature.

Suppose my Progenitor Mimic becomes a Mutavault^. At the beginning of my upkeep, it will be only a land. Will Progenitor Mimic create a new Mutavault token, or is this prevented by the fact it isn't a creature?

^ For those who may not know, it will copy exactly what's printed on the Mutavault card and be a fresh Mutavault, not a 2/2 creature, because of how copy works. You can check the 4/15/2013 rulings on Progenitor Mimic.

Yes, it does. When a card says "this creature", is still refers to itself even if it is no longer a creature, so the ability still triggers and resolves.

If an ability of an object uses a phrase such as "this [something]" to identify an object, where [something] is a characteristic, it is referring to that particular object, even if it isn't the appropriate characteristic at the time.

Yes, you'll get copies of Mutavault.

Let's look at Wall of Tears for a second.

Whenever Wall of Tears blocks a creature, return that creature to its owner's hand at end of combat.

MTG uses pronouns whenever possible. The only reason Wall of Tears doesn't say "return it" instead of "return that creature" is that it would be ambiguous as to whether whether the Wall of Tears or the attacker should be returned to its owner's hand. "That creature" is not meant to be a check. This is codified by 201.5 and 608.2i.

201.5. If an ability of an object uses a phrase such as “this [something]” to identify an object, where [something] is a characteristic, it is referring to that particular object, even if it isn’t the appropriate characteristic at the time.

608.2i. If an ability’s effect refers to a specific untargeted object that has been previously referred to by that ability’s cost or trigger condition, it still affects that object even if the object has changed characteristics.

In Progenitor Mimic's case, 201.5 applies (but not 608.2i, at least not for the first instance of "this creature"), allowing the ability to trigger.

9
Parallel Lives and Dance of Many
13
Can a Dimir Keyrune receive a Cipher, and does the encoded spell stay?
2
Is it possible to copy a land with Mimic Vat that is turned into creature by an enchantment?
9
Can an instant spell be used before an upkeep triggered ability resolves?
5
Can I exile a token copy of Greenwarden of Murasa for its second ability?
4
Does Saheeli Rai's (-2) targeting Riddleform make a creature?
3
What happens when Progenitor Mimic copies a legendary creature?
4
Can I reorder the abilities of Hydra's Growth and Simic Ascendancy?
4
What happens if Mirrorhall Mimic copies a transforming creature?
9
Is a copy of a vehicle that enters tapped and attacking a vehicle?