In 4-player Unspeakable Words, what is the likelihood of more than one player not going insane?

Unspeakable Words is a word game where each player tries to score 100 points without going insane. Each player begins with 5 tokens that represent their sanity. Whenever a player scores a word, they roll a d20, and if the roll is greater than or equal to the points you scored, you don't lose a sanity token. If you lose all your sanity tokens, you lose the game.

What are the odds that 2 or more players would survive to 100 points in a 4-player game?

(Note: Assume players can always score words of the point value they wish between 1-20, and will not attempt actions that leave them with a less than 50% chance of winning)

This question's been unanswered for a while, so I thought I'd take a crack at it. First up, I should say that I haven't looked at the four player case, just the two player game. The main reason for this is that it makes presenting the data a lot easier. I've put some graphs later, and you can see that they're already hard enough to understand for the two player case! The methods I've used here could be applied to the four player game, the program would just take longer to finish as there are many more game states.

I've assumed a two player game, where players can choose to score between 1 and 20 points on their go. I've ignored the letter distribution, and whether it might be hard to score a large number of points in one turn. I've assumed both players start from 0 points and 5 sanity, and have to get to 100 points without losing all their sanity. I've accidentally alternated between the use of "sanity" and "lives", because this game is rather like a computer game where you start with five lives.

I wrote a program to search through all possible game states for two players, and for each determined the best move. This isn't as hard as it sounds, the positions near the end of the game are easy to find the best move, and then the positions earlier in the game quickly reduce to a position we've already considered. The source code is here.

The output of the program is a lot of lines like:

This line means that if it's player 1's turn, and they have 2 sanity left and 3 points, and their opponent has 3 sanity and 13 points, then the best move is to make a word of length 3, which will give them a 17% chance of winning.

The output of the program is 250000 lines long, which is not very accessible. I've converted this into a couple of graphs. The first looks like this: 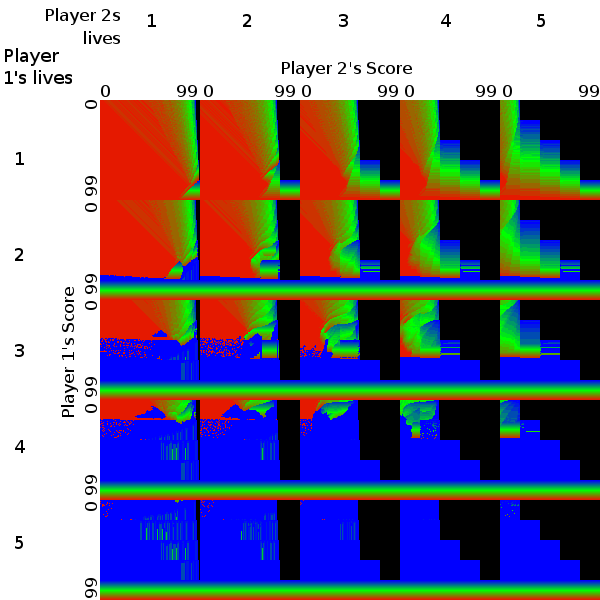 Another thing I looked at was the probability of player 1 winning in each state. This second graph shows that: 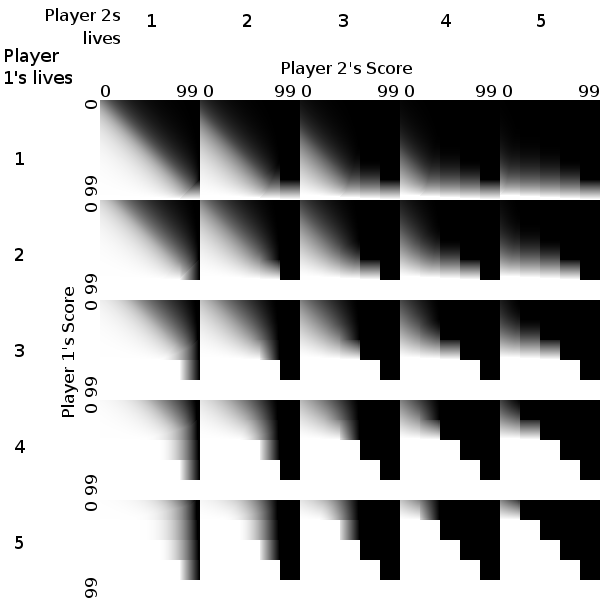 Some interesting features of the results above.

Within many of the inner squares there is a step-like pattern. This is clearest in the bottom right square. This is caused by a player being able to force a win. A player can force a win when they have more sanity left than the number of turns it will take them to get to 100. The bottom right square is where the players have the most lives, and so a forced win is more common.

Towards the left of the first graph are some dotty red/blue regions, e.g.:

I'm not completely sure about why these exist. It could be a bug in the program, although I did check it through. It might be related to the fact that when the probability of winning with different moves is the same, my program picks the largest score. The other thing I noticed was that the best moves, as shown by the link in the question, are the extreme scores.

My program gives the first player probability of winning for the starting position as 53.9%. It advises that the best move is to risk a 20 point score (if you don't lose a sanity then you have a forced win by continuing to make 20 point scores).

Not the answer you're looking for? Browse other questions tagged statistics or ask your own question.

16
What is the optimal method to shuffle an organised deck of cards
8
What is the best way to shuffle a large deck without damaging the cards?
7
What are the most frequently used Dominion cards in winning decks?
20
What are the chances of losing Pandemic on the first turn?
3
Why is 'equity' much more commonly used than 'winning probability'? What is the mathematical formula that links 'equity" and 'winning probability'?
1
In Gin-Rummy, what are the chances to start with a Gin?