It was a 16 square playing board. Each piece was a clear rectangle 1 wide, 2 tall. Each piece had a red and yellow ball in the center encased in a transparent box. The object was to get 4 in a row. Everytime you played a piece, you also laid one down for your opponent.

The game includes a playing board with a 5x5 grid and 12 playing pieces. Each piece consists of two cubes, each with marbles in the center - one red, one green. Players take turns placing pieces on the board, trying to make a specified pattern in his color but not his opponent's -- all the while having to play both his color and his opponent's color each turn. There are several different games explained in the rules: make 3, 4, or 5 in a row (in 3D) before your opponent, form a square in your color, form more three-in-a-row alignments than your opponent, etc.

As far as I know the board is 5x5, although there are rules for 4x4. Picture is of Double Decker, one of the repackagings of this game: 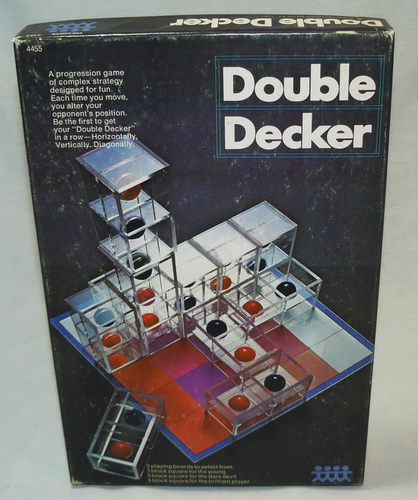 4
Table top maze game
5
Identify 3D Tic Tac Toe type of game
4
Early to mid 70's 2-player maze race game - What was the name?
4
Game based on old phone 'Snake' Game
4
What is this game that is about connecting streams?
5
What is the name of this board game?
7
Identify this game - 4X board game between 2000 and 2010
1
Help identify “blockart” game
1
Kids clubhouse game?