In Star Fluxx, have you needed to change how The Computer and The Unseen Force play?

Star Fluxx has a number of cards that end up being quite powerful and can throw chaos into a game that seemed to be almost over. Most of these cards are either Actions or Surprises and can thus only be used once for each time they are drawn. However, the two Keepers, The Computer, and The Unseen Force seem to provide decisive long-term advantages.

The Computer - If you have this card on the table, Draw and Play one extra card per turn. Also, you may exceed Hand and Keeper Limits by one. 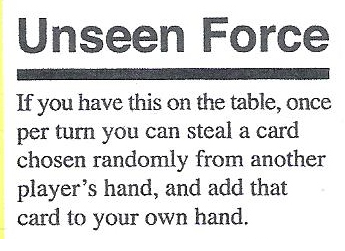 Unseen Force - *If you have this on the table, once per turn you can steal a card chosen randomly from another player's hand, and add that card to your own hand.

I come from a long history of playing control decks in Magic: The Gathering and so I try and dig deep into the strategy of how to accrue small advantages and deal with random elements in card games. Star Fluxx has significant random components to the point that sometimes a player can win in a single turn when no one suspected that they were even close to victory. To me, this suggests that the best strategies will be those that rely on drawing more cards than your opponents and playing more cards than your opponents, rather than striving for any specific combination of cards or rules.

I have a small sample size, but I have only lost 1 game where I controlled The Computer or The Unseen Force for more than 2 turns (I have won the other 5). Star Fluxx, though, is more about having fun through narrative and social interaction than min-maxing. The problem I am running into is that these cards seem to reduce the fun that the other players are having because they recognize that they're being slowly ground into a defeat.

Have you had the same experience with these 2 Keepers? Have you instituted any house rules to modify these cards?

I tend to think of Unseen Force as annoyance, whereas The Computer is probably the strongest card in the game. There are various things you can do to try to dilute the power of an opponent's The Computer, raising the draw and play count rules and creating hand and keeper limits. Plus you can always steal keepers or play Brain Transference. That said, if someone pulls out The Computer at the start of the game then it is really hard to keep up with them. There are other strong cards in the game like Holographic Projection and The Captain so it doesn't feel like the game is broken to me.

Is it possible that you are a much better player than your opponents are and it is this that grinds them down?

I can see this being an issue in a competitive tournament, but you are right, Star Fluxx is about creating a narrative and having fun with friends.
I don't think that Star Fluxx could even be played in a competitive setting, In most games that I've played the computer has indeed greatly increased the frequency of playing cards but the turnover rate for the computer has always been high.
When someone has the opportunity to take a card, the computer is always the first to go. In the games that I've played, this has never been less frequent than once every five turns.

The way to get a high turnover of the computer and the unseen force is to simply play with more people. I usually play Star Fluxx with 5 or 6 people, cards get played frequently and someone's always changing the rules, the same action or suprise card will re-appear over and over again. In these larger games the winner is basically random, but it honestly feels to me like the game was designed to be played this way.

Our games of Star Fluxx with more than 2 players tend to go very quick once everyone has the cards understood. It then becomes a game of seeing if anyone can get the time traveler and the time portal, just for kicks.

We do have two house rules to extend the game.

1 is we bring in zombie jamboree from zombie fluxx. Shuffling and redistributing the keepers and creepers can give the game a lot more longevity.

2 we bring in an extra creeper. We use the evil rabbit from monty python fluxx. We call this card the dick move card. It is considered evil, for the purposes of star fluxx rules and goals, but it has an extra action of making every OTHER player have to completely turn in all the cards in their hand and on the table. Even more than the zombie jamboree, this card can completely upset a game with 3 or more players, and extends the life of a game into 2 or 3 reshuffles of the discard pile. This card restarts all players except the one who drew it.

We decided that if you use the "draw 1" the you MUST play 1 - if you do not draw an extra card the you DO NOT get to play an extra card - seems to be working but not to the opponent's aid :P

0
In Star Fluxx, how does the game end with Play all?

5
Fluxx - What counts as a 'play'?
19
What are the differences between the Fluxx games?
10
Does Play X go into effect immediately?
6
Is Fluxx a game of skill or luck?
3
What are the rules with attached creepers in Cthulhu Fluxx?
5
Conflict in Fluxx
0
In Star Fluxx, how does the game end with Play all?
7
Fluxx - when is the winning condition reached?
5
Play all but one rule is into play. What if play one extra card rule is also in play?
2
How can I play games by myself when I don't have a table?