Is it possible to die out of a combat?

I have a question about a particular combat scenario and it's going to need a diagram! 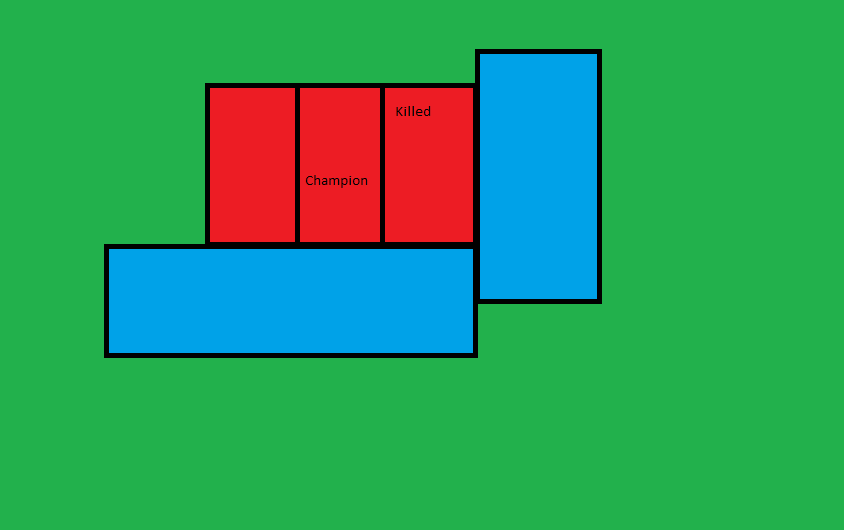 This is a scenario which came up in our game last week. My units are blue, I'm in the front and the flank of a single unit of 3 monstrous cavalry (bloodcrushers I believe). My champion from the unit at the bottom is engaged in a challenge with the champion of the Bloodcrushers.

In my last turn of combat the marked bloodcrusher was killed by my flanking unit. As such they are no longer in base contact with the enemy unit (and even if they were they would touch the champion and so couldn't hit the regular troop).

What happens in this scenario? We came up with several options but couldn't agree.

I spoke to someone in Games Workshop today, this is what they told me.

Firstly it's important to remember that you can't die out of combat. The first model to remove would be the outer one.

If you do get into the situation above (for example if there are characters involved). There are a few ways to resolve. You can remove the flanking unit from combat by moving them back an edge or you can slide one of the units in so that the combat can continue. Locking the flank unit in the combat but unable to strike could be argued but it's not really in the spirit of the game.

There's nothing official in the book so it's a matter of agreeing with your opponent which scenario is fairest. If in doubt roll for it!

1
If a chariot dies, does the character die also?
1
Can units join a character in combat?
2
The charged unit dies before combat
1
Model positioning during multiple close combats after removing models
1
Close combat after a rank is removed from an attack on any flank
1
Reforming to gain extra rank in close combat