When is a card returned to the owner's hand?

Consider the scenario where I have Darting Merfolk in play 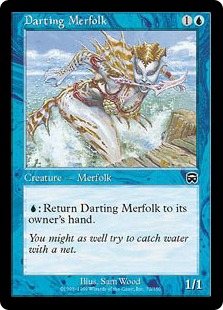 My opponent plays Hand of Death 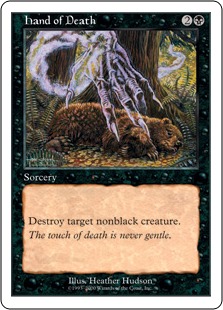 I decide to tap an island and return the Merfolk to my hand. Is the card destroyed or is it returned to my hand? Is Hand of Death put in the graveyard?

It would return to your hand.

I don't have access to the MTG site to be able to cite the rulebook, but it's all down to the stack.

When the spells and abilities on the stack resolve:

I recommend reading up on the Stack, understanding it is vital to getting the most out of Magic: The Gathering: Guide to the Stack

17
What happens when a creature with Persist AND Undying dies? ('return to battlefield' issues...)
2
What happens if a creature is returned to owner's hand after blocking or being targetted?
10
MTG—Multiple Card Stack Confusion
1
Athreos, God of Passage and Gift of Immortality
14
Does killing a face-down morph trigger the death triggers printed on the card?
7
Does "return" from graveyard to Zone X require a card to have been in Zone X?
10
What happens if a creature's ETB would bounce Thalia, Heretic Cathar?
0
Are there cases where an Enchantment Aura effect remains on a creature when it is returned to owners hand?
4
If Storm Herald leaves the battlefield before the Auras it returns, are they still exiled?
3
When exactly do I get to return my Commander to the Command Zone after it goes to the Graveyard?