Do creature effects trigger every time they move base?

Do creature effects trigger every time they move base, or just the first time they enter play?

For example, if I play Invader, gain 1 VP, then play Invasion and move it to a second base, do I gain another VP? 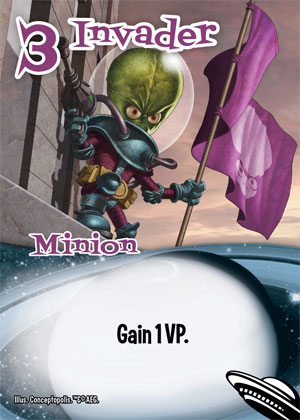 No, Invader grants a victory point when it's played, not when it's moved.

Play: You play a card when it’s one of the free cards you get in step 2, or any time an ability specifically says that you’re playing it. A card’s ability happens when you play it. When cards are moved, placed, or returned, they’re not being played, and their abilities don’t happen.

Move: This lets you move a card from one location to another. Moving a card does not count as playing it. Minion abilities do not happen when you move a card.

Not the answer you're looking for? Browse other questions tagged smash-up or ask your own question.

5
Do actions that affect all cards also affect cards in your hand.?
2
Play before a base score: deciding the order
1
The Homeworld base
2
Can I resolve all special effects or just 1 at a time in turn with other players before and after bases score
3
In Smash Up, do I have to execute an effect when a card is played or can I choose to do it later in the turn?
4
Doubts with the “before a base scores” part
2
Does affecting an action card affect the Minion it has been played on?
1
I missed scoring a base
1
Smash up: First mate with ongoing actions attached to it. Do the actions follow him?
1
When does a Leprechaun's Ongoing ability activate?