When do I play with the full board in Neuroshima Hex?

I have just bought Neuroshima Hex and read the rulebook. It mentions just using the hexes in the centre of the board, but that the other spaces around the outside are included incase a scenario is played. What are these scenarios? And will I need to use the bigger board in a 3 or 4 player game?

Looking through the Neuroshima Hex 3.0 rules (pdf), I see the following: 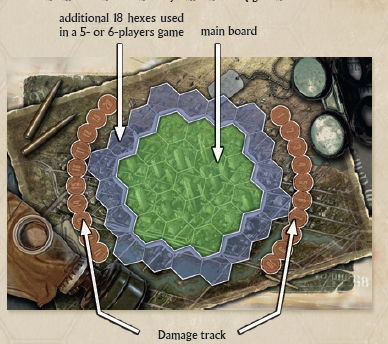 This rule book doesn't mention scenarios. However, I looked up one of the expansions: Neuroshima Hex: Babel 13 (pdf), and it mentions scenarios:

A Neuroshima Hex scenario is a single game which applies additional conditions to the basic rules of the game. These can include Terrain, unequal distribution of forces, conditional events, etc. Campaigns for Neuroshima Hex consist of a series of interrelated scenarios.

This would imply that a scenario might make use of the extra hexes for, perhaps, unequal distribution of forces.

Not the answer you're looking for? Browse other questions tagged neuroshima-hex or ask your own question.

7
How to kill the red army (Moloch) in Neuroshima-Hex
2
Neuroshima Hex - Medics
3
Are discarded tiles reusable or removed from the game?
3
Do automatic battles end your turn in Neuroshima Hex?
9
What happens if, after battle, board is still full?