Can I cast Enchant Creature cards on Enchantment Creatures (Bestow) that are on another creature?

Say I have a Nessian Courser which is enchanted by a Nylea's Emmissary. I want to cast an Enchantment - Aura on the Nylea's Emissary, for example: Ordeal of Thassa. 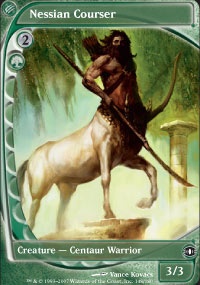 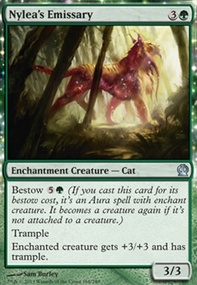 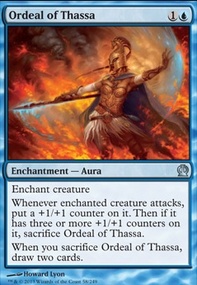 Perhaps for some reason, I know that the Nessian Courser is going to die at the end of the turn, or I just want to diversify my play so that one burn spell won't cost me two cards. Can I cast an Ordeal of Thassa on the EMISSARY? It is technically a creature, even though it's being used as an enchantment currently.

Is this possible, and if so is my understanding of how it works correct? Thanks!

No, because whilst Nylea's Emissary is bestowed on another creature, it isn't itself a creature - it's just an Enchantment — Aura.

Its card type might be Enchantment Creature — Cat, but whilst it's bestowed, that's overwritten to just make it an Enchantment — Aura. That's thanks to the following two rules:

702.102a (the expanded definition of Bestow): [snipped] "Bestow [cost]" means "You may cast this card by paying [cost] rather than its mana cost." and "If you chose to pay this spell's bestow cost, it becomes an Aura enchantment and gains enchant creature.

205.1a: Some effects set an object's card type. In such cases, the new card type(s) replaces any existing card types.

The text I've bolded is something Nylea's reminder text points out, though it doesn't explicitly say how it remains an enchantment in the reminder text.

As a result, whilst Nylea's Emissary is a bestowed permanent, it's just an aura and not a creature. Note in particular the "it becomes a creature again" statement in Bestow's reminder text - that wouldn't make much sense if it was a creature to begin with.

Furthermore, Thassa's emissary says "Enchant creature". Whenever something simply says "creature", it means a permanent on the battlefield that's a creature. Nylea's Emissary isn't a creature whilst it's bestowed, so it can't be enchanted. This is flipside of the mechanic that allows a Mutavault to be enchanted with something that says Enchant creature whilst in creature mode, even if its card type doesn't include "Creature".

5
Do bestow count toward cards that say "when [sub-type] enters on the battlefield"
5
Can you cast creatures exiled by Ashiok/Nightveil Specter with bestow?
17
Can you cast a creature with Bestow while you control a Steel Golem?
3
How many Auras can enchant one Creature?
2
When a Creature dies, does the Enchantment Creature attached to that Creature go in the graveyard?
0
Can Enchantment Creature play its enchanted ability?
3
Double Hardened Scales
4
Does "creature with flying" count creatures that gained flying from an enchantment?
0
Can another instant be used to buff an attacking creature, after another instant was cast that would kill the creature?