Identify board game played as a child featuring cute monsters

When I was a child I had a board game that featured small plastic monsters. If I recall each player chose a type of monster and you got three monsters to play with of that type.

I remember nothing of the game play apart from I that I think you could chose which of your monsters you moved in your turn.

There were Blue, Yellow, Red and Green Monsters I remember the Blue monsters where like lumpy blue clouds on legs with a bulbous nose and one of the other colours was triangle shaped with an eye on two of the three sides of the triangles.

A friend asked me what the game was called recently and though I remember playing it I can't for the life of me remember what it was called.

I found it, the game was called The Gunge Game and was released in 1989 by Waddingtons. It doesn't even have a wikipedia entry. 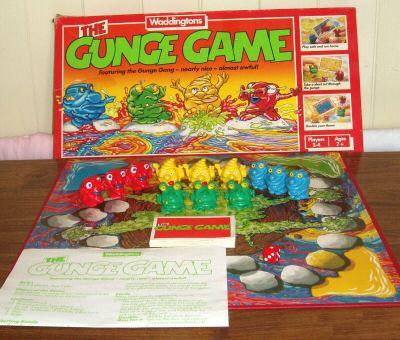 15
Identify Strategy Game with Chariots and Elephants
12
Vintage Monopoly Game: What Year is it?
4
What is this pattern/tile board game?
1
Help identify "blockart" game
1
Can't remember name of board game
1
What was the game with a plastic Bigfoot that left footprint counters?
12
Help me identify an old family board game (from memory)
6
Anyone know a game with yellow and blue ducks?