Why are bridge games seemingly documented only by the hands and bidding?

I was looking for an interesting sample hand in Bridge to sort of demonstrate a card game system that could be used for Bridge (a game I know exists, and thought I knew more-or-less the system of it, but which I do not play). I wanted to have a simulation play through a famous and well known hand...as I understand the game is studied.

Seemingly I was correct, and I found this game that was apparently an old one rehashed in a James Bond movie: 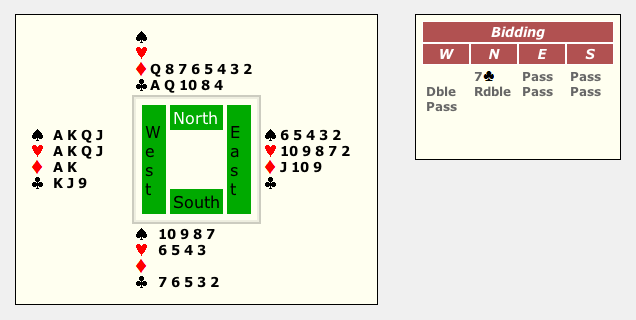 Okay... that's great, but that's just the hands and the bidding. Where's the list of plays?

Couldn't find them. So I looked around to try and find another "famous" Bridge game that listed the plays, but they all seem to just skip that. Just the hands and maybe one small note about "they ruff this" or "they scrobble that" etc.

Is it simply the case that in Bridge you can hand-wave and say that the game is essentially over once you've seen the hands and the bidding? Because that looks to be what people do. Can anyone give me the actual play list for this game, merely from that notation of the hands and the bids?

Usually play in double-dummy problems (that is problems with all hands visible) is left as an exercise to the reader. The play in this problem depends on the opening lead.

If the opening lead is not a diamond, it is ruffed in hand. A diamond is ruffed in dummy and a club played toward hand, where it is won as cheaply as possible. Another diamond is ruffed in dummy (note that the AK of diamonds have now both been played), and another club finessed. Declarer may now play his high club from hand, drawing the last trump, then the diamond queen, establishing that suit. Now declarer's hand is good the cards may be played in any order.

For the sake of a concrete list of plays, I'll give one (with the leader listed).

In real life, North would show their hand after trick 4 and say something like: "I claim the rest of the tricks: The CA will pull the last trump and then I will play diamonds from the top."

People have answered about the Duke of Cumberland hand you found as an example (and if you looked up Fleming's text, you would find a complete play. I just confirmed with my copy).

In general, it's a lot like recipe books for chefs, as opposed to recipe books for duffers like me. Instead of a detailed list of ingredients and thorough preparation steps, each recipe is a couple lines of "with this, this and this, add this during the simmer and serve with that". The key is that is all that is required for the chef to fill in everything else, with their knowledge and experience; all they need is the critical things that make this dish not some other.

And so with explanation of bridge deals. Their audience can be assumed to be very knowledgable; so only the unusual parts of the auction (if any) and the critical parts of the play need be mentioned. The readers will be able to work out the rest. And that's why Fleming wrote out the full play - he couldn't expect all Moonraker readers to be able to see it, the way even the writers of the newspaper bridge columns can expect.

This happens in the bar, after the session as well; everyone has their copy of the hand record, and the teller explains the auction, and says something like "I got the fourth best club lead, which I won. Because there was no other reason to double the slam than he thought he had two trump tricks, I hooked the 7 on the first round, and when partner showed out it was all over. If he hadn't doubled, I probably go down." People see it, smile at the result, and the next person brags about their brilliance (or gripes about their bad luck).

It happens during play as well; only about half of hands play to trick 13 (and many of those only because online it's easier to play the last two tricks than claim). Once all the problems are solved, declarer shows their hand, makes a claim statement (something like "club loser on the long diamond", or "pull the last trump"), everyone quickly sees how the rest of the play will go, and on to the next hand.

I actually find that details of play records (such as what ruds gave you) are harder to understand than a flow explanation.

Not sure what your question is.

Are you looking for a repository where hands are played to the last trick?

There are plenty of repositories (check out the Vugraph archive on BBO), but in majority of the hands, you will never see the whole hand played out, but you will see some list of plays.

Bridge players hate wasting time on the obvious, and for that reason, there is the concept of "claim" where you stop the play by showing your hand and saying how many tricks you are going to take (stating a line of play, which is not the same as a list of plays). This is especially so in higher levels of the game.

For instance, in this Bond hand, just saying finessing clubs and setting up diamond is good enough for most bridge players to figure out what the sequence of plays will have to be. With the East/West hands hidden, this will become obvious once East shows out of clubs and the Diamond Ace and King fall the first two times diamonds are played (So a claim will occur after about the first 5-6 tricks).

Most bridge hands you find online will be a puzzle to the reader, and in most cases, just a paragraph or so are sufficient for the intelligent reader to grasp the solution.

What you seem to be asking seems akin to posing a mathematical problem and asking for a computer verifiable proof, or a chess master announcing mate in 10 and you asking for every possible sequence from that point.

btw, "hand waving" would not be the words I would use, especially if you have absolutely no clue about what is being talked about.

This is an example of a "cooked" deal. The defender, West, has three AK's and various assorted other values, and yet can't take a single trick because all his cards are badly positioned in the worst possible way. As a result, the hero makes a highly dubious 7 club bid, and a dubious redouble, and gets away with it!

Most bridge hands in movies and stories are described in the way you discuss (bidding and no play) because the purpose is other than bridge (here, the idea is to make the hero, James Bond look good, even though his bidding is quite foolish).

"Serious" bridge, as discussed in bridge books or columns, do feature play as well as bidding. The problem is that non-bridge books and literature gloss over these bridge matters for non-bridge reasons.

Not the answer you're looking for? Browse other questions tagged bridge notation or ask your own question.

36
Why is the strong 1NT so prevalent in Bridge?
1
Why Do People Use "Precision" Bidding in Bridge?
5
What Are The Key Features Of The "Fantunes" Bidding System?
17
Why are beginning to intermediate bridge players told to delay learning how to bid certain types of unusual hands?
4
Is Duplicate Bridge (standard Matchpoints) a game of pure skill?
5
In Bridge, Is "ruffing" a good enough reason to postpone drawing trumps?
10
Simplest bidding system for introduction into bridge
2
In Matchpoints, is it worth risking a ruff to try for an overtrick in the following situation?
2
Can I use simulation to show that one bidding point count is more accurate than another?
3
Bidding in contract bridge