I've got a large collection of boxes piling up for Carcassonne, both the little ones that fit in the palm or your hand (like River and The Count) and the medium size ones like (like Inns & Cathedrals and The Princess and the Dragon)--currently three of each size.

Is there an elegant way to store the pieces all in the main box for easier storage and transportation? The little boxes fit just as they are, but the bigger ones are little trickier. It seems there should be a good way to make use of all these cardboard inserts, but their shapes are all pretty generic and they waste a lot of space. Is there a good way to cut then up and reuse them?

Space-wise, all the pieces from the expansions fit easily into the main box, but they are really loose. I also want to keep the tiles from each expansion grouped together and easy to pull out one at a time.

A great solution to this struck me as I was falling asleep a few nights ago (strange how the brain works): I won't need the expansion boxes anymore, so I could cannibalize those into smaller boxes.

After a lot of careful measuring, I took the expansion box lids and scored them across the top in three places with a pair of scissors and a ruler, creating straight fold-lines. Then I trimmed off the bottom edge and a portion of each side, and folded on my scored lines. I made my boxes a few eights of an inch taller than they are wide, but I think an even square (i.e. three equally spaced score marks on the lid) would be just fine, maybe even better, since a couple of mine turned out to be a tighter fit than I intended.

I kept the two corners in the upper portion of the lid intact, so it could serve as a lid on my smaller box, hinging at one of my folds. I folded the whole thing up and, after some final trimming, I taped the corners together. I also supported each folds with a strip of tape, to make sure they don't wear out and fall apart later. 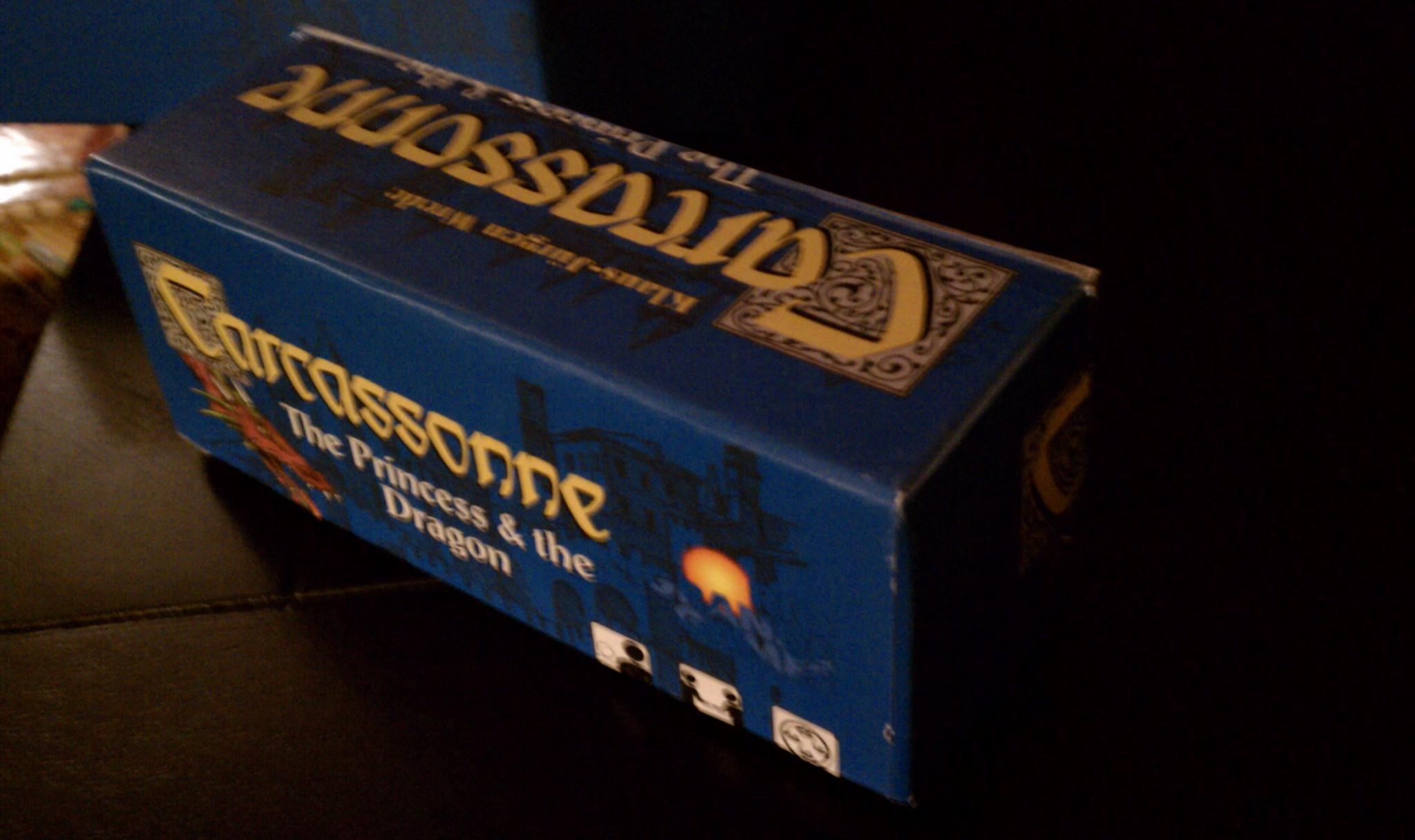 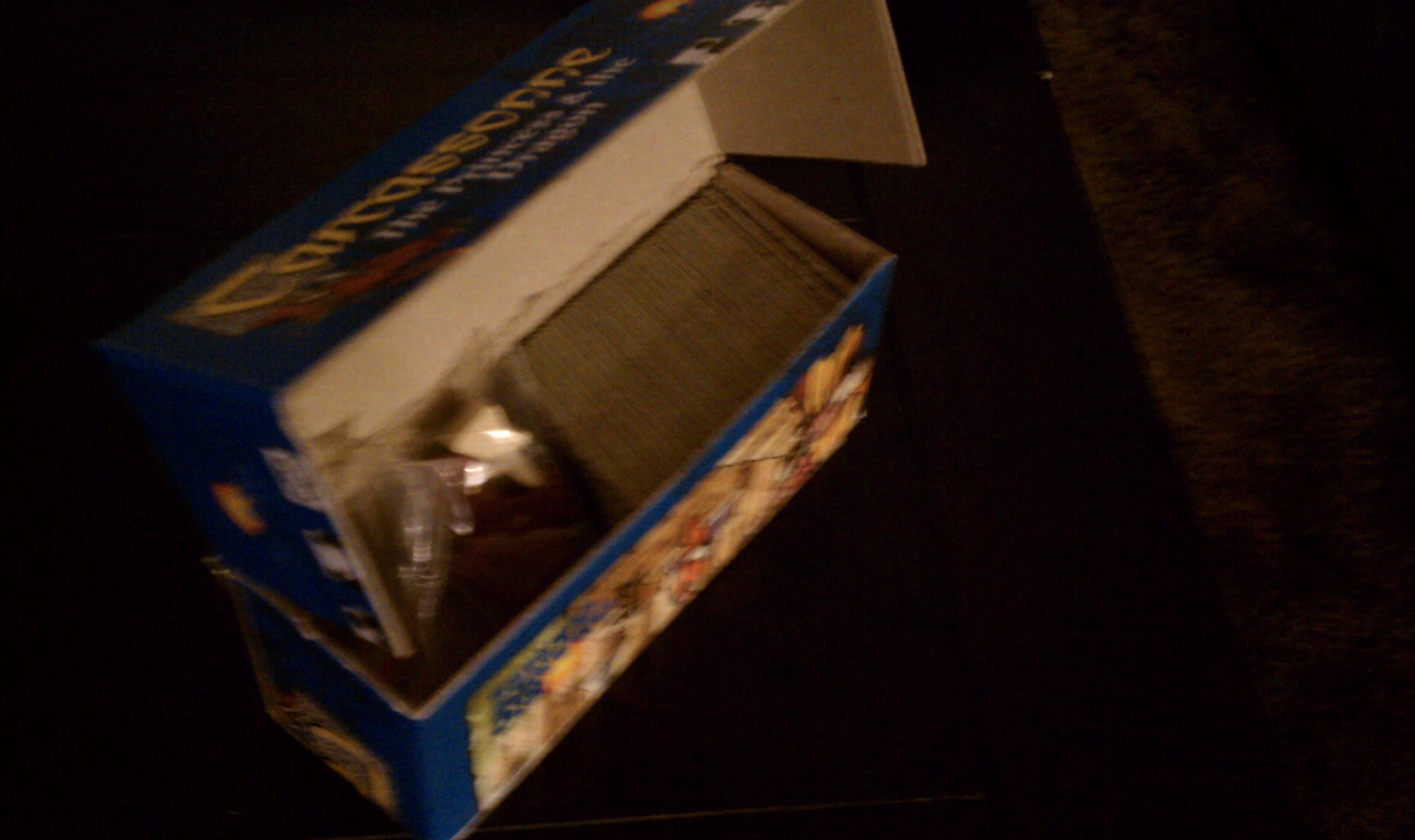 I trimmed the original cardboard insert and just kept the long narrow part that holds the tiles (bottom of last photo, below). This left room for my three re-sized expansion boxes (Princess, Traders, and Inns), plus my small expansions (The Count, King & Scout, River II, and River (rubberbanded)) and my meeples in a bag.

I'm not sure if all Carcassonne expansions would fit using this method, but I own most of them, and it fit nicely for me. 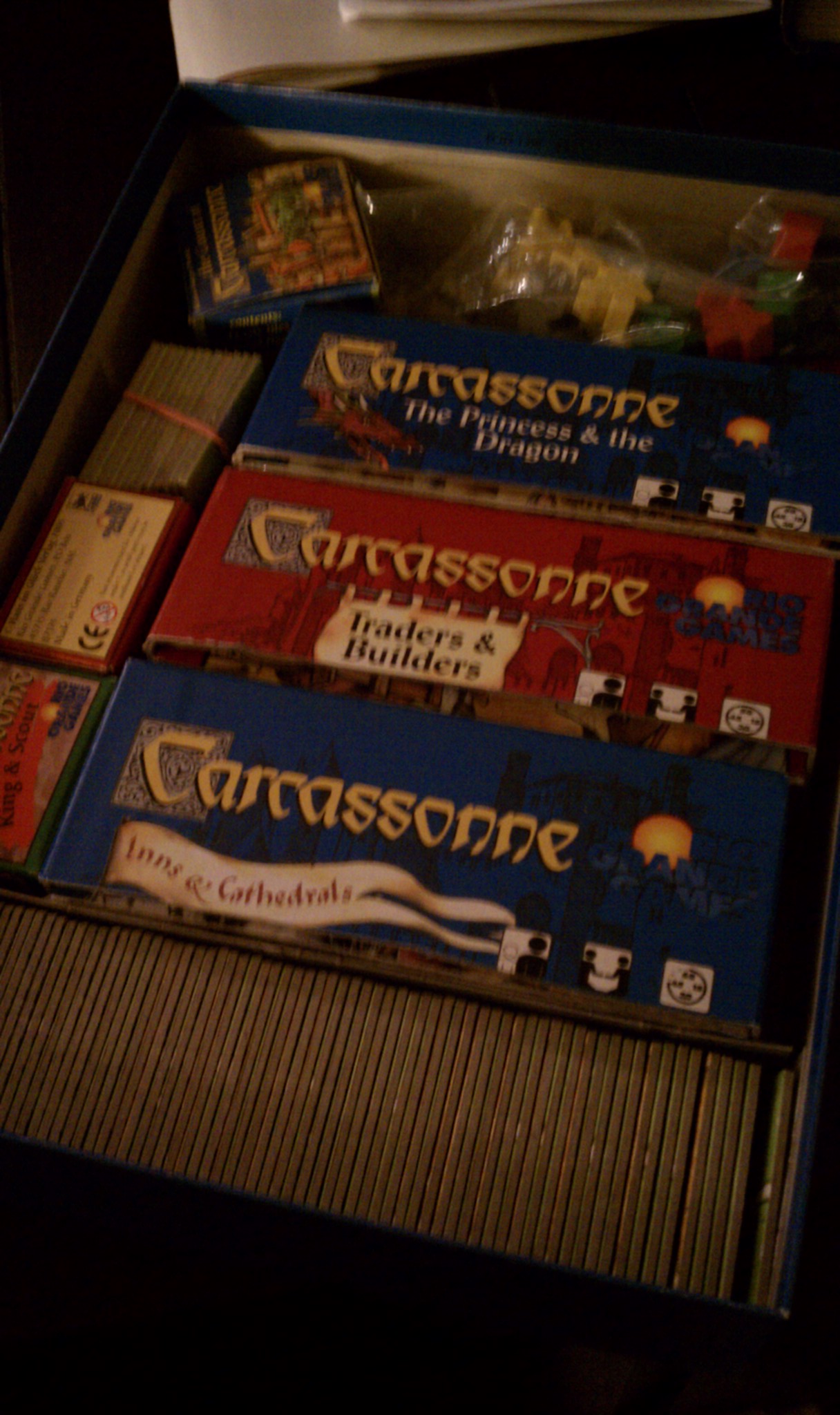 My attempt at a diagram. This is the expansion box lid in original form, with cuts and folds marked. Create a mock-up with a piece of scratch paper first, if that helps. 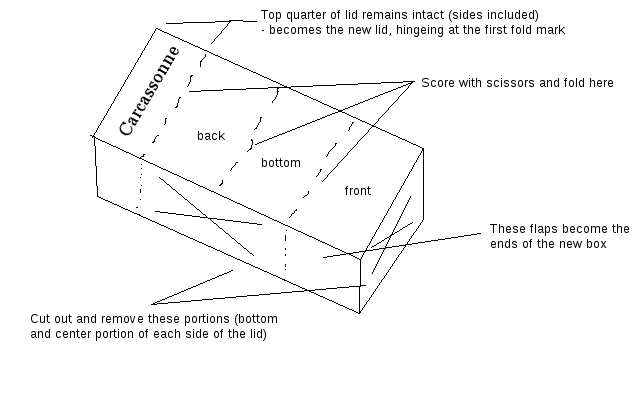 I put all the tiles from the base game, minus the starting tile, in the cloth bag from Traders & Builders, and the tiles from each major expansion (T & B; Inns & Cathedrals; Bridges, Castles & Bazaars) in piles wrapped with a rubber band each. All my followers, builders and the like are in one ziplock bag, all my bridges in another, and my castles, along with resource chits, in a third. I keep the tiles from the mini-expansions I own in the boxes in which they came. All this fits nicely in my box from the base game since I removed the folded cardboard from the inside.

I built two custom boxes for Carcassonne tiles using some check boxes from the bank and some spare cardboard. I glued dividers into the boxes and labeled each section with the expansion title and number of tiles. It's a little bit of work, but you get custom boxes that are sized perfectly for the tiles you have. I then put the meeples and scoring tiles into their own zip-lock bags. The tiles, meeples, scoring track, and rules all fit nicely within a small cloth bag. It's much more compact and easier to transport than the massive Big Box 2.

This might sound a little silly, but why not just put them into medium or small zip-lock bags? Even if all the bags get tossed around inside the box, they'll be easy to paw through and find.

Then again, I just tossed everything I had into the cloth bag that came with the Builders & Trader expansion, and put each set of meepls into their own ziplock bag, and called it a day.

You know, you can construct very sturdy, custom boxes from chipboard or foam-core board. It's lots of fun, and lets you get exactly the type of box you always wanted.

I store all my tiles in the assembled Tower, tower in the draw bag, and first thing put back in the box. All the meeples in snack sized ziplocks, nestled around it, and the odd bits (Count's castle, River/River II) in ziplocks as well.