How to force the opponent to take the x squares?

I've been told that I must do two things in order to win hard games in Othello (Reversi): 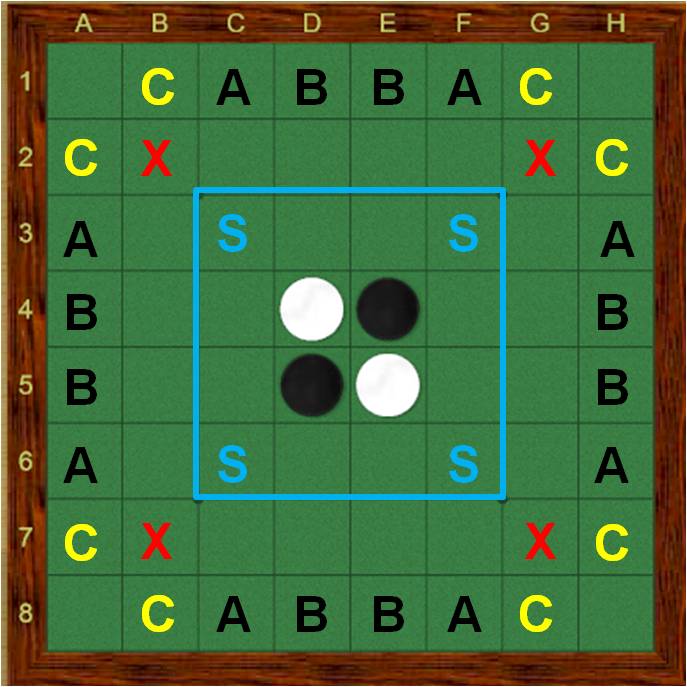 We all know that we have to take the corners. I am tired of keep hearing that stupid hint. What I want to know is how force my opponent into taking the x squares and the squares around the corners so I can use his pieces to jump into the corners. What squares do I have to take? what strategy to follow?

It actually can be a bad move to avoid the X squares as long as possible. I've seen games where players so pointedly avoided them that the four corners were taken before the first X space was played. If that happens, especially on an already-dense board, the corners lose a lot of advantage because it can be impossible to "riposte" and capture back any spaces taken by a play in the X square, because everything further along that line is already filled.

So, "Never make this move" is virtually never a good rule to follow. There's always a scenario, no matter how contrived, where it can not only be a good move, but a game-winner.

However, "avoid making this move" is a good rule in this scenario, and therefore forcing your opponent to play it is also a good tactic. As far as "how", the basic strategy is to make one or more of those Xs his only legal move at some point in the game. You do this by exploiting "parity"; make the move that is the best combination at the time of flipping as many discs as possible, while leading him to make the move that flips as few as possible. The fewer spaces of his color, the fewer lines and therefore spaces he can play on. The trick is usually to time a big move that tips the board in your favor and takes away a bunch of moves for your opponent at just the right time.

The basic mantra is, "make the last possible move on the line". If you take the last space in any row, column or diagonal, any further moves to recapture spaces in that line have to be made in a different direction. That generally gives the corners a high value because they are the endpoint of the three longest lines on the board; however if the corner play is the next-to-last move on a line, and you can still make the last move, it's often of very little advantage for your opponent to take the corner at that time, and so giving it to him by playing an X square can actually work to your advantage by removing his ability to use that corner to re-establish an edge. For the same reason, if you already have an adjacent corner to the one you and your opponent are fighting for, the advantage to him of owning that corner is reduced and the advantage to you of owning it is increased.

That will inevitably lead to a fight to avoid giving your opponent the first corner; once the first corner's taken by one color, it ends up a scramble to take the adjacent corners. The last corner's worth is often the least, as by the time it's taken the edges are typically very dense and taking it is unlikely to change very many spaces.

The permutations of the game makes it hard to come up with one specific strategy. Personally I like to "dance around" the X squares, trying to tease my opponent into placing his pieces there. But always remembering that it should cost him more than it should ever cost me.

As a general rule, your objective is to limit the number of liberties (that is, the number of moves) available to your opponent, while at the same time increasing yours. This is what is called the mobility strategy. When this objective is attained, one is said to have control of the game.

However, don't forget that you must force your opponent to make a bad move : it's not enough if he has even one non-disastrous choice at each move ; he must have no good moves at all.