Proper use of Dominion card Upgrade

In what situations is Upgrade (Intrigue) useful? I have never seen anyone buy Upgrade in the games I've played where it was available. Whenever I play with Upgrade and Swindler, I always give Upgrade to my opponents in exchange for their 5-cost cards. They never know what to do with it... What are we doing wrong? How can we make use of this card? 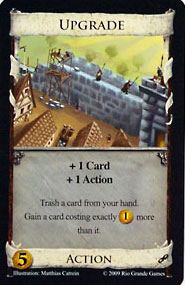 Upgrade is quite strong by itself for two reasons:

These reasons are enough for Upgrade to be something you want to have in your deck, and not only in one copy. There are also, in my experience, two factors stemming from the kingdom card pool that "modify" Upgrade's usefulness:

And finally, don't forget that if you have too many Upgrades you can always use one to turn another into a Gold.

You can use Upgrade to gradually improve your deck while also carrying out a larger strategy. Because Upgrade is non-terminal (that +1 Action) you can turn your Estates into Silver or middling 4-cost cards into more powerful 5-cost cards while still playing your other Actions.

It is tricky, I won't deny that, but it can have some value. I don't see it as the core of your strategy, though.

In addition to the +1 Card and +1 Action, Upgrade is one of only two "gain a card costing X more" (note: I'm ignoring Forge here) cards that has the word exactly on it (the other is Cornucopia's Remake).

Meaning that if you Upgrade a Copper or Curse, you get nothing back (assuming you didn't play a Bridge before it). With Remodel and Expand, you must gain another card costing up to 2 or 3 more, even if the cost is lower than that of the card you trashed. 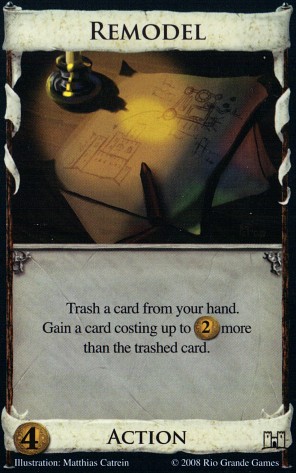 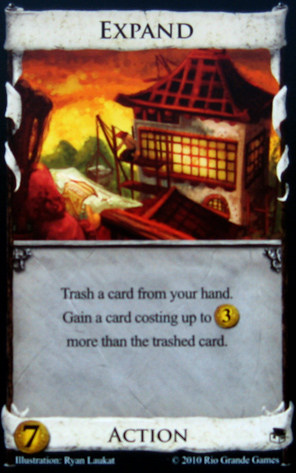 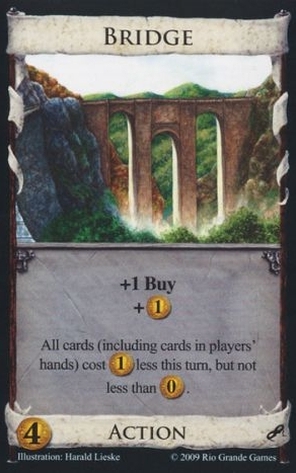 There are two key points here:

You can use upgrade to solve both problems. Getting rid of your starting copper (and likely estates) will improve your deck. So will trashing that first-turn buy that's just too weak to get you to provinces later. It's a non-terminal action, so it gives you a way to trash these cards without wasting turns, as you tend to do with something like chapel or steward. And do remember: it's an upgrade. You're not just removing a weak link, you're replacing it with something to strengthen your deck.

There are some great special cases, too, like upgrading four-cost actions to duchies in the end game, and trashing curses.

You can buy many Upgrade as early as possible in the game. This is a really good starting strategy. By many, I mean as much as 5 or 6 cards. It will clean your deck so quickly from all the Copper and Estate, you will be able to upgrade your Upgrade into Gold and reach the Province much faster than you can imagine.

And don't forget to upgrade your Estate to Great Hall (instead of Silver) if both are on the table!

Upgrade allows you to thin your deck with a non terminal action. Being able to get rid of coppers and curses is almost always helpful.

You an also trade out poorly performing or obsolete cards for better cards. Heck, upgrade an Upgrade to a gold :)

I love being able to thin my deck and will almost always grab 1-2 of these if there are no better deck thinning options available.

The biggest advantage of Upgrade is it helps to clean the junk (coppers, estates, and curses especially) out of your deck fast. And then, when you don't need them, turn the upgrades into gold or other 6 cost cards. Here as an example of game of how to use them effectively:

30
How does Intrigue change your general Dominion strategy?
12
Correct/Recommended use of Masquerade in Dominion: Intrigue
3
Limiting the number of silver and gold cards available in Dominion
24
What is a good way to store multiple expansions of Dominion?
6
How much would the cards from Dominion: Alchemy cost if you wanted to use them while not playing with potions?
5
Dominion - Saboteur use
11
When should I take a curse in response to Torturer?
5
Choosing between Shanty Town and Village when both are in the Kingdom set?
7
How do I use the Dominion & Dominion Intrigue Update Packs?
0
Dominion: How exactly do cards "enter play"