Is there a standard way to number the faces of a 20-sided die?

I hold a 20-sided die (icosahedron) in my hand. As with any other die, to help fairness, values on opposing sides sum to twice the mean (as explained here).

I know that in a "normal" 6-sided die, there are norms about the numbering order (as mentioned here). My question is this: is there any standard way of numbering the faces of the 20-sided die? For example, is 1 always between 7, 13 and 19? (these are the values that I see in the die that I am holding at the moment). If so: can you see a reasoning?

Some reasoning would be the take further step the effort to make it fair; however, I don't have any rule in mind that will achieve this end.

Finally: if there is no standard, is there any set of standard ways? For example, I can't imagine anyone putting 2 just next to 1, right?

(this question may be asked about other die types as well...)

I assume that we are speaking about a D20 that makes some attempt to roll fairly, such as the ones used in D&D. This is different from the aptly named "spindown" D20 which is numbered in a simple spiral.

Why do opposing faces add up to 21?

According to Everything2.com's article on D20, opposing sides add up to 21 so that the numbers most distant from each other to appear on opposite sides of the die.

If you are engraving the numbers, you'll have to carve out more material for some numbers than for others. The more you dig out, the lighter that side becomes.

Everything2 advises that we arrange these pairs in a way that heavy sides are next to light sides, but they provide no actual arrangement. In fact, I cannot find any actual mathematics behind what the best possible arrangement actually is. After a substantial amount of searching, I have concluded that the "standard" arrangement we know today probably originated from D&D, but I can't back this up.

Speaking of standard arrangement, here is the actual answer to your question.

Is there any standard way of numbering the faces of the 20-sided die?

There is no industry-wide standard for mapping numbers 1...20 across the faces of a regular icosahedral d20 die. Manufacturers have used several configurations. Their choices appear in dice collections here and here.

If there is no standard, is there any set of standard ways?

The term "standard die" is often used as a generic term to refer to a die which implements the opposite-faces convention: values on opposite faces sum to one more than the number of faces. In the case of the d20, the sum is 21. Since so many dice makers use this convention, it might be considerd to be the de facto standard; however, this convention says nothing about how the face pairs are distributed across the die. Actually, the term "standard die" refers to a member of the set of dice which implement the opposite-faces convention. Rainbolt refers to one such member with a net from the Dice Collector; Bosch, Fathauer, and Segerman offer another net from the same set. In these two cases and others, different numbers surround face "20":

Bosch et al. offered a thought experiment to explain how the opposite-faces convention preserves averages for imperfectly shaped dice. In a word, they explained how the convention mitigates oblateness.

Some reasoning would be the (sic) take further step the effort to make it fair; however, I don't have any rule in mind that will achieve this end.

To see how large this optimization problem is, start counting configurations. There are 20!=2432902008176640000 ways to map numbers 1...20 onto the faces of the regular icosahedral d20 die, but many of these configurations are rotationally equivalent. The size of the rotational symmetry group |G|=60. So, there are

rotationally distinct configurations implementing the opposite-faces convention . This count includes the mirror images. Among these are (an unknown number of?) configurations with balanced vertices and faces. With a computer search, Bosch et al. found one of them. This configuration appears on the mass market as the Magic-numbered d20 and on a 3D-printed d20 as the ENUMERATED BALANCED ICOSAHEDRON.

I end with a simple question. Among the 61,931,520 "standard d20s", how many implement balanced vertices and faces? Is the configuration which Bosch et al. found the only one? 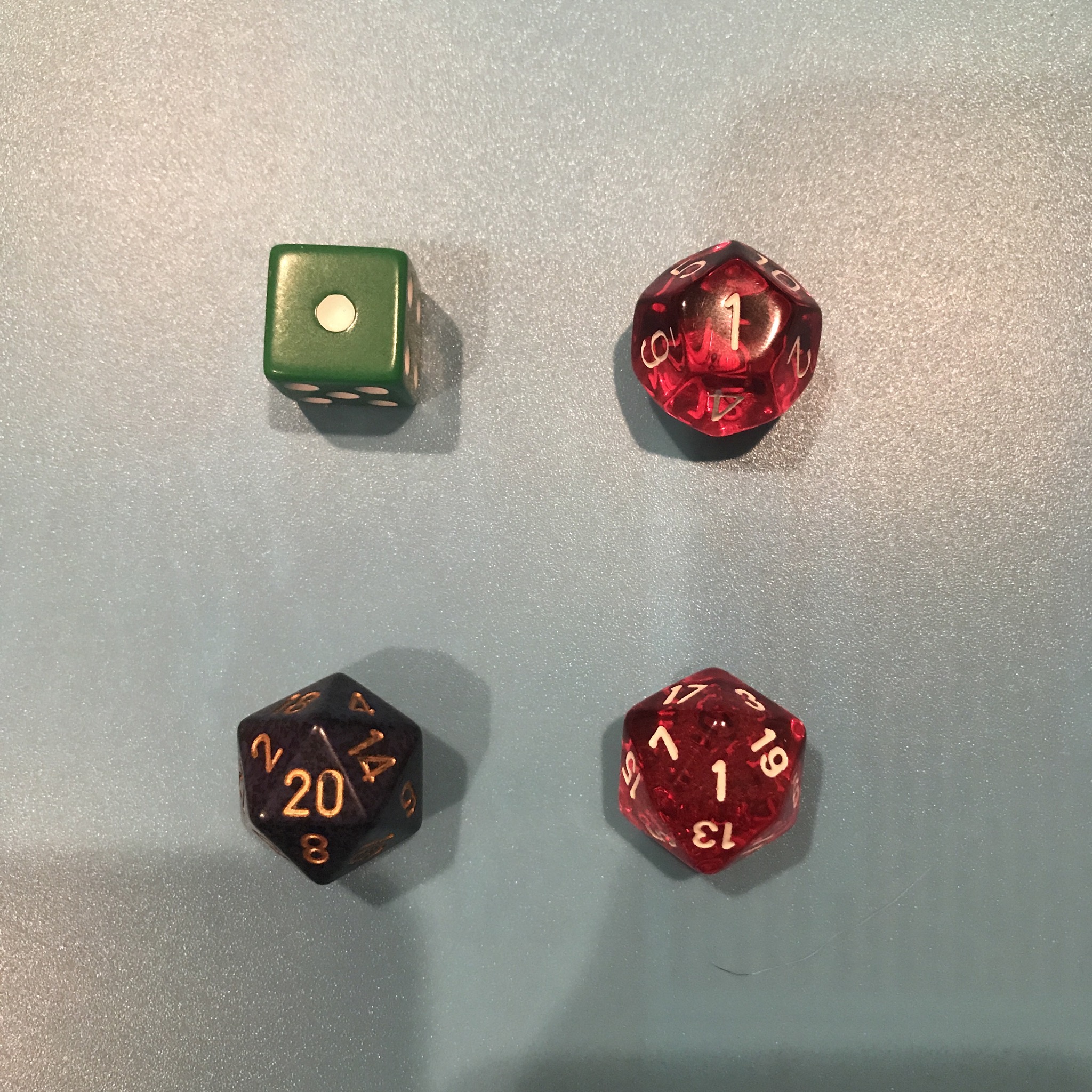 And even number sides dice is numbered counter pairing sequentially, said differently, they are accessing and descending opposite in series.

Odd dice, I am sure they’re is a mathematical gimmic that always “adds” to some number and using a direction to do the formula.

I found a pattern that is consistent with all equilateral die. If n=number of sides of the dice and k=a number chosen on the die, then the number directly parallel to k = n-k+1; however this doesn't work for non-equilateral dice like the d10. I still don't know what the relation between k and the numbers adjacent to k is yet.

Not the answer you're looking for? Browse other questions tagged dice .

3
What's the most intuitive way to use a die for a pass/fail test?
3
How is the die for Cat Tower configured?
13
Fairness of Cowry Shells as Dice
8
What game has this weird 12 sided die with clouds, a bug, a pear and other stuff on it?
24
Where is this six-sided die from
0
Is there skill in rolling a spinner?
13
Why do people call an n-sided die a "d-n"?
2
What is the optimal strategy for deciding dice to reroll when trying to reach a target value?