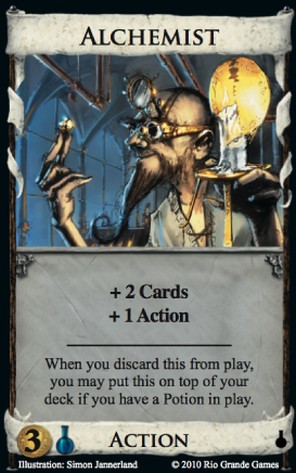 I have a friend who loves this card. I know that every time it's on the table, he will load up on them, and chain long turns that take ages. It's even more powerful when Scout and/or Apothecary are available, too.

Obviously, I should be able to defeat this strategy by 1) beating him to it (which winds up being more of a luck thing), or 2) augmenting it with a particular card he may not have noticed on the table. But to me, that makes all Alchemist games very monotonous.

I realize that sometimes an Alchemist deck is just the best strategy, but I also know that this shouldn't always be the case. What are the weaknesses of this strategy? Are there sorts of cards I should look for to play an alternate strategy that can still win out over an Alchemist-heavy deck?

In the short term, cards that make him discard cards are the best way to go. Minion is the best because it makes him discard all of them: 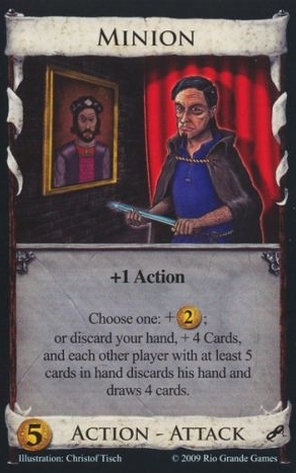 Other cards that help in the short term: 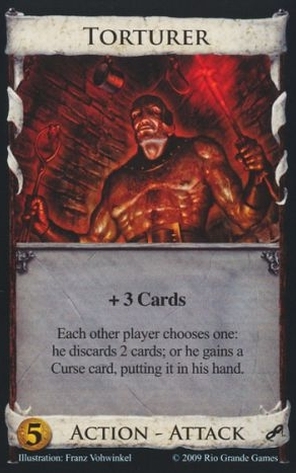 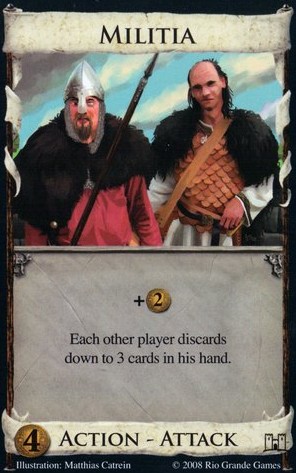 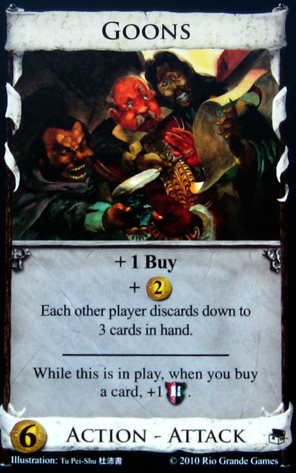 (sadly, Ghost Ship does not)

In the long run, there are several strategies:

One last note: Each time he buys an Alchemist, he's buying another action card. If he's buying action cards, he's not buying money cards. As bad as it sounds, Alchemist-heavy can often be defeated by Big Money decks, even if they have 5 Alchemists in their hand (and thus essentially start with 10 cards).

Also, make sure he isn't putting the Alchemists on top during turns he doesn't have a Potion in play.

Edit: It's been a while, but one thing I noticed I forgot to mention when I answered this in 2010: Alchemist is only +1 Action, which means unless they have a +2 Action card somewhere, they only have one action at the end of the chain.

Possession is great for making Alchemist fizzle. Attacks like Militia, Goons or Torturer would also help significantly, as would anything that would help you cram Curses, Estates and Coppers into his deck. If he's managing to get five Alchemists going, Masquerade could be fun, although by that time it may be too late.

If you're playing without Colonies, then Alchemist is often a weak card. The opportunity cost of buying the 2 Potions the strategy needs is quite big and a non-Potion strategy will be able to build an insurmountable lead in victory points if there are no +Buy cards on the board for the Alchemist strategy to catch up.

Just buy a single Smithy/Masquerade/Envoy+treasures and expect to beat the Alchemist player 8 games out of ten...

Powerlord's answer is quite good. I'd add Masquerade to his list of effective counters, particularly if you can combo it with Goons or Militia. (But then again, comboing Masquerade with either of those is ALWAYS a good time. :-) )

When playing in Isotropic, I usually beeline for Alchemist when it's available. Usually the other player does the same thing; I rarely lose when he doesn't, but it DOES happen, even when none of Powerlord's anti-Alchemist cards are in play. If you've got a set lacking any +buys and that has other powerful cards, you can defeat the Alchemist if you can get to the Provinces before his deck hits critical mass. In a 2-player game with no extra buys, an early two-Province edge can be damn near insurmountable.

On the other hand, if you don't get that edge, once he goes critical he'll be drawing his entire deck every turn. Alchemist is one of the few cards in the game I regard as simply broken.

Not the answer you're looking for? Browse other questions tagged dominion dominion-alchemy .

12
Dominion - Using Stash
10
When is the woodcutter worth buying in Dominion?
4
How does the addition of the Potion treasure from Dominion: Alchemy change the game?
8
When should I buy a Possession in Dominion?
6
How much would the cards from Dominion: Alchemy cost if you wanted to use them while not playing with potions?
16
When would you buy the Thief in Dominion?
37
Setup for more than 4 players in Dominion?
10
Dominion Last Province
8
How do I organise my cards in the Dominion big box insert?
7
How do I use the Dominion & Dominion Intrigue Update Packs?