What is this game with Knights and Ogres and wolf riders I played when I was a kid?

I grew up in the 80s, so the game should of come out in the late 80s or early 90s. I believe that the game was made by the same makers that made Hero Quest, but I might be wrong.

The game was an War based game, that had 2 sides a good side and a dark side. The light side had knights and the dark side had a giant Ogre, wolf riders, and other stuff. I really liked it because there was different strategies based on the side you were on.

Hopefully this is enough info that someone can answer me... I've done a bunch of googling, but have had no success...

Battle Masters a collaboration of Milton Bradley and Games Workshop: 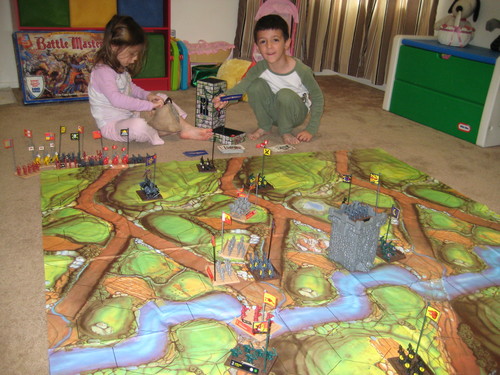 This is a great game, had a huge board and the wolfriders and cool units you were describing. I played several matches of this as a kid with my buddy who also played HeroQuest with me. I don't remember the mechanics very well, but I will never forget how cool the pieces and map are.

As @SuicideClyde answered, this game is Battle Masters. I still have my original copy, though the box isn't in great shape. The mechanics revolve around a deck of cards which have pictures of specific units for each player - such as the Empire's archers or Chaos's wolf riders. The two most badass pieces are the Empire's cannon (which has a deck of tiles to fire huge distances and possibly take out several units in one shot) and Chaos's Ogre, which can move and attack several times in one turn, and takes several damage to kill.

The deck mechanic is interesting, though it can lead to situations where one player takes several turns in a row before the other player ever getting a turn - such is the nature of a child-shuffled deck, especially - but it's great fun. Damaged units actually lose figures from their bases, reducing the effectiveness of the unit in future combat. It's a relatively elegant system for a kid-friendly game, and it's great fun to look down over the mat at your massive armies, especially if - like me - you were never able to afford/were never exposed to Warhammer figures growing up!

10
What is this game, played with chess board and pieces, but with totally different rules?
8
Genre-mash up battle game
4
What was this Mouse Trap-like game with a basket, stairs, and metal parts?
4
What is this oversized playing card deck for, with numbers 11-15 and Barons and Knights?
4
Game based on old phone 'Snake' Game
9
Board game about setting fairy tales right
1
What game with symbols and dice is this?
4
Childhood dangers card game made in the 70s/80s
1
What card game was played in "Solo: A Star Wars Story"?
5
What board game for 2 to 4 players with 1 token each and the winner is the first to the top of a raised platform?