What energy type does poison use and does it stack?

I am new to Pokemon but not TCGs in general. 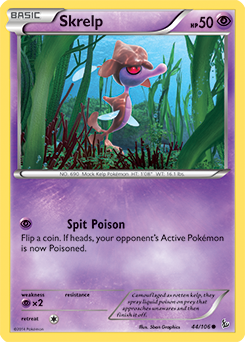 I suggest you to read the basic rulebook again, it's very clear on what poison do there. I learned almost everything from the rulebook. But, since I am an old pokemon player (last played 4-5 yrs ago), so I forgot what poison exactly do. But AFAIK, it damages the affected pokemon between turns.

*) This is different if Spit Poison has initial damage attached, for example, 30. So the initial damage will be 10 (30 original - 20 resistance), aside from the poison status damage.

The Pokémon TCG handles several things different from the video games. Simple answers to your questions would be quite misleading. So first things first:

Weakness/Resistance: Besides the obvious like Resistance causing a flat -20 to attack damage, another major difference is that attacks have no Type in the TCG. So when you go to apply Weakness and/or Resistance, you look at the Pokémon's own Type, not what Energy when to pay for the effect.

Poison does no damage: Poison is a what is called a "Special Condition" in the TCG, along with Burn, Confusion, Paralysis, and Sleep. There are other effects that attacks or Abilities can inflict on a Pokémon, but those five have special rules. Poison in the TCG places a damage counter on the Poisoned Pokémon between turns. Though doing damage involves placing damage counters at the end, an effect that places damage counters (like Poison) skips a lot of steps, one of those being the steps where Weakness and Resistance are applied. So Resistance does nothing to Poison.

Stack or Replace: Some Special Conditions stack with each other, but any time you inflict a the same Special Condition on a Pokémon, like Poisoning something which has already been Poisoned, the newer of the two replaces the older. So you cannot use Spit Poison multiple times to increase how many damage counters are placed on it from Poison between turns. Some Pokémon place multiple counters with Poison! So be careful not to replace a stronger Poison with a weaker one. If the card doesn't specify, then it just places one damage counter from Poison between turns.

2
How can I find what basic and stage 1 Pokémon cards can evolve to?
7
Is there a maximum amount of energy that can be attached to one Pokémon?
1
What is the difference between add damage counters and attack damage
1
What type of Pokémon coins are these?
1
What is the use of the return label in Pokémon TCG?