The Proper use of Stations in Ticket to Ride Europe

I played a game of Ticket to Ride Europe recently, I don't own it but am vaguely familiar with the rules. When we started playing however there was some confusion about the placement of stations and I was out-voted 3:1. What the rules specifically say:

My interpretation is that this allows you to do what it says, use a single route owned by another player. The next bit toward the end of the section however states: 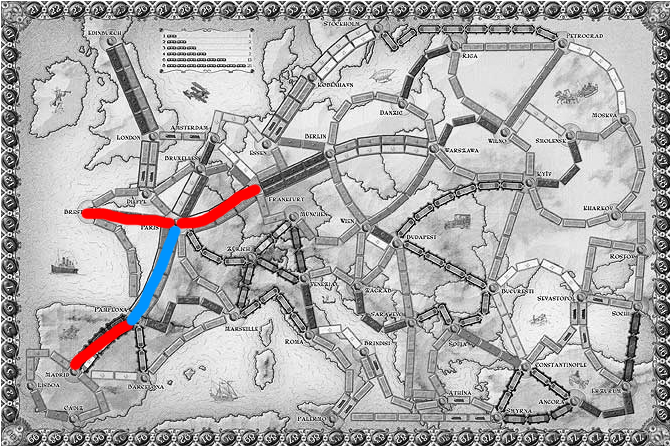 Can someone confirm if I'm correct, in that you can only use 1 link, and in this scenario both destination tickets are completed at the end of the game. If so can you think of any convincing arguments I can put forward to the group?

There's no concept of direction of travel in Ticket to Ride.

If, by the end of the game, a player has created a continuous path of his color plastic trains between the two cities named on a Destination Ticket he holds, he scores the additional points indicated by the Point Value on the Ticket. If he has failed to complete a continuous path between those cities, he deducts the Point Value on the Ticket from his total score.

A path between cities must be created. Nothing about traveling from one of the cities to the other city.

As such, the Brest-Madrid path exists because it did use the same route into Paris as the Frankfurt-Madrid path, the Pamplona-Paris route.

Ticket to Ride is a simple game with straightforward rules. It's obvious to me that the purpose of the second rule you quoted is to prevent the station from being used to borrow two different routes. In fact, this is stated explicitly earlier in the rules (quoted below). It's a botched attempt to clarify this rule (which was already plenty clear).

This means your group is clearly wrong when they believe that several routes going out of a city could be borrowed.

My proposed rewording of the second rule you quoted is the following:

Only one route is ever chosen per station. This means that a player can't have a station grant him the use of two routes for two different tickets, but any number of tickets can use the chosen route. The Train Station owner does not need to decide which route he will use until the end of the game.

I've looked up my rules and your quote is correct but I believe you are right and that the second 'rule' is just poorly written.

It makes sense that there is something in the rules to stop the player moving the station from one line to another between Tickets. So, if you were the blue player you could use a blue station on the Paris end of Paris-Frankfurt for Pavlona-Frankfurt, but the rules need to prevent you from moving it to the Paris-Brest line for a second trip from Pavlona.

I think this is what the text was trying to convey, but failed to do so. Rephrasing it as the following might help:

If a player uses the same Station to help connect cities on several tickets he must use the same city route (the one with the station) for all of those Tickets.

This fits with the spirit of the application of a Station being to 'convert' one line to your colour. No other part of the rules has anything like as asymmetrical a mechanism as the rest of your group seems to be suggesting. It seems extremely unlikely that Alan Moon (whose rules typically have a natural flow) meant this unnatural oddity, and far more likely that this is a small error in transcription somewhere.

The way I look at it, you have one path in and out.

When you go from Frankfurt to Brest, you travel East/West through Paris. To travel to Madrid would require a South exit, so is not allowed. Brest to Madrid would have you coming into Paris but on another route and not from Frankfurt, so that is not a valid scoring route. Your logic is wrong.

However, you did say you required a way to convince others that it is valid, so...

The fact is, you don't need a train station to get from Frankfurt to Brest. It is a complete route. You are only "invoking" the train station to achieve the Brest to Madrid route. One route = one way in and out, QED. ;)

Not the answer you're looking for? Browse other questions tagged ticket-to-ride-europe .