What are the differences between Chinese and Japanese rules in Go?

Although there are some minor differences between rule sets used in different countries, most notably in Chinese and Japanese scoring rules, these differences do not seriously affect the tactics and strategy of the game.

There are two basic scoring systems used to determine the winner at the end of a game; they almost always give the same result. Territory scoring counts the number of empty points your stones surround, together with the number of stones you captured. While it originated in China, today it is commonly associated with Japan and Korea. Area scoring counts the number of points your stones occupy and surround. It is associated with contemporary Chinese play and was probably established there during the Ming Dynasty in the 15th or 16th century.

In most games (as already noted) the two rulesets produce the same strategy and outcome.

Differences between the current Japanese and Chinese rules:

Note that in close games between players who are strong enough to accurately predict score, a small difference in points may cause a completely different choice of strategy for a particular board position. 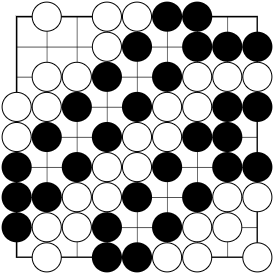 With no komi, this 9x9 position is B+1.5 in Chinese rules and W+8 in Japanese rules.

Note that black can connect/fill the false eyes, and thereby threaten to encroach at the bottom left corner, forcing white to play in the top right corner. This exchange leads to a gain for black in Japanese rules (reducing the margin to W+7) but does not alter the score in Chinese rules.

11
What is the difference between thickness and heavy stones?
12
Why are Chinese stones half-convex?
10
Understanding influence and using it properly
13
How do ranks work in amateur Go?
4
What is the Chinese-language equivalent of gobase (main resource for SGF files)?
9
What rules are used in international events
9
How to balance influence vs territorial plays on a 13x13 board?
2
In Go (board game) under Chinese rulings how does the scoring of empty territory work?