How should I set up a draft from multiple old sets?

I recently recovered a treasure trove of "lost" cards. 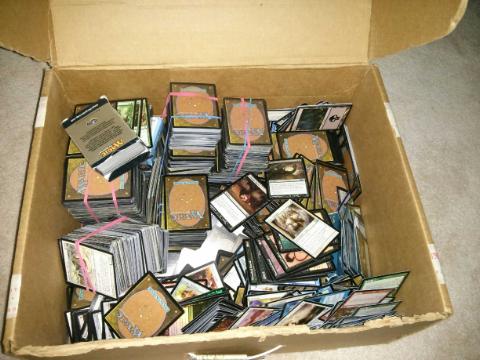 (If you're physically recoiling at the thought of all those warped and potentially bent cards, I'm right there with you)

They run the gamut from Portal (1st) to Odyssy Block to Zendikar Block to M10 and M11, and who knows what else. I'd like to catalog them eventually (I estimate about 5,000 cards, including land), but in the meantime, a friend suggested I use these to set up a draft!

There's a couple of issues at play here - the cards are obviously not in packs at this point, and while the rarity makes it pretty easy to compose boosters of 11 commons, 3 uncommons, and 1 rare/mythic, the cards are not sorted per set -- are there any considerations to be made regarding to mixing sets? (At this point, I'm not even sure the full list of represented sets)

If so, which sets might be "better" for drafting? Part of the appeal of this box is the size of the timegap between the early and later cards, so I'd like to mix in as many sets as possible.

In terms of numbers, each player getting 6 "packs" of 15 cards is usually how my friends and I draft -- is there a benefit to using more "packs" due to the set disparities? Any other thoughts or considerations I may have missed?

I made the assumption that you trust your friends not to steal your cards.

Two formats are relevant to your situation.

Drafting with boosters made from already opened cards is known as a Repack Draft. My local game store runs these all the time for a much discounted price. I sometimes help out with the setup. We value cards according to B.R.E.A.D.

Some cards are simply broken outside of their respective sets. Others seem all but useless. The useless cards are no fun to draft. The broken cards should just be considered bombs. If you don't know how to judge the power level of a card, then you shouldn't expect a balanced draft the first time around.

Just a tip - put your own spin on the packs. We once added a Terramorphic Expanse to every single booster. It was well received by the players.

This is the same as a Repack Draft with two exceptions: you get your cards back. With this in mind, you can put a lot more thought into selecting cards. You can make sure the colors are more even (or not). You can make a removal heavy cube, a bomb heavy cube, or even a cube made entirely of rares and mythicals. You get to be the designer.

I strongly suggest you read How to Begin Your Cube by Evan on CubeDrafting.com.

The nice thing about cubes is that if you misjudge the power level of a card or group of cards, you can just adjust it after the draft.

I would do the following: Sort the cards according to their color, plus one pile for multicolored, artifacts, and nonbasic lands.
Then make sure that each pile (except for the land pile) has around 70% creatures. If the color piles are of very different size, then I would randomly remove some cards (or you could fill up the other piles with cards from your collection). From the non-creature spells, try to keep removal and avoid silly situational cards like Mudhole. Then make booster packs of 15 cards that roughly contain an equal amount of cards of each color. With those booster packs you can then continue to create the limited format of your preference.
Personally, I would ignore rarity completely.

Not the answer you're looking for? Browse other questions tagged magic-the-gathering mtg-drafting .

20
How many creatures should be in a draft deck?
22
Running a MTG draft without actually having to buy new boosters for each player every single time?
4
What are the Pros and Cons of using cards from multiple different sets when drafting?
7
How should my strategy change in an MTG Draft based on the number of players?
1
How should I change my usual draft strategy in a Two-Headed-Giant draft?
1
How is the current format for an MTG booster draft calculated?
4
How many cards do I need to make a collected set "draftable?"
7
How long should a draft round last by official rules?
7
Has there ever before been card text that had no effect with cards from the same block?
1
Why don't players draft the week before a new set releases?