I enjoy playing Agricola, but the box the game comes in doesn't lend to keeping the pieces organized, and I generally spend a fair amount of time taking everything out, and even more time putting everything back so it's not a complete mess the next time I play.

Any good suggestions for alternative storage that minimizes the set up/tear down?

How about a foamcore insert? I just finished my Agricola foamcore yesterday. I haven't benchmarked the setup and breakdown times (yet). There are no zip top bags to open, it should only take a minute.

I have friends who get a little tacklebox organizer for each game. This takes more effort than that, but it's much more customizable.

For a crash course on how to make something like this, check out this video series: Using Foamcore by The Esoteric Order of Gamers. 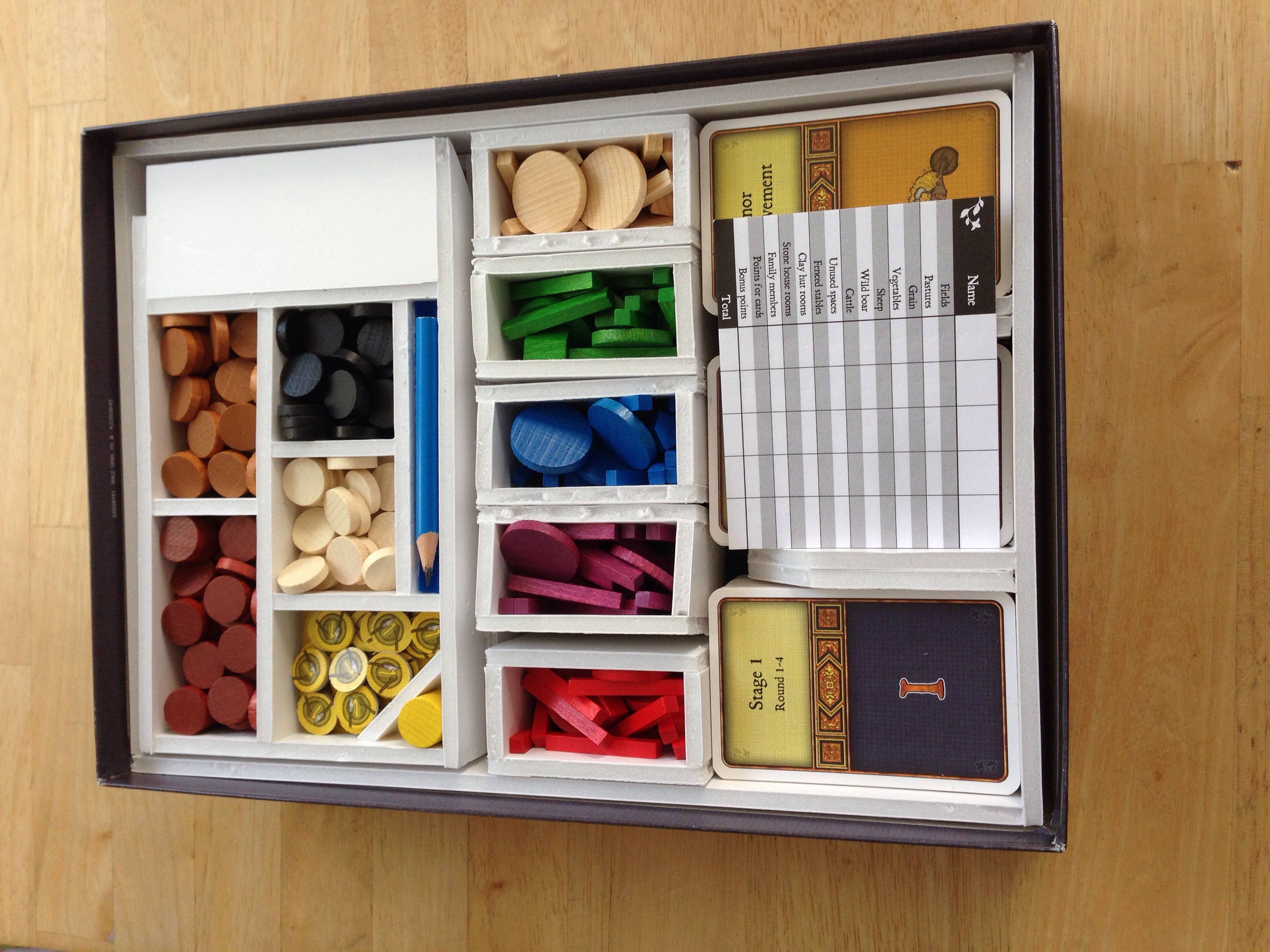 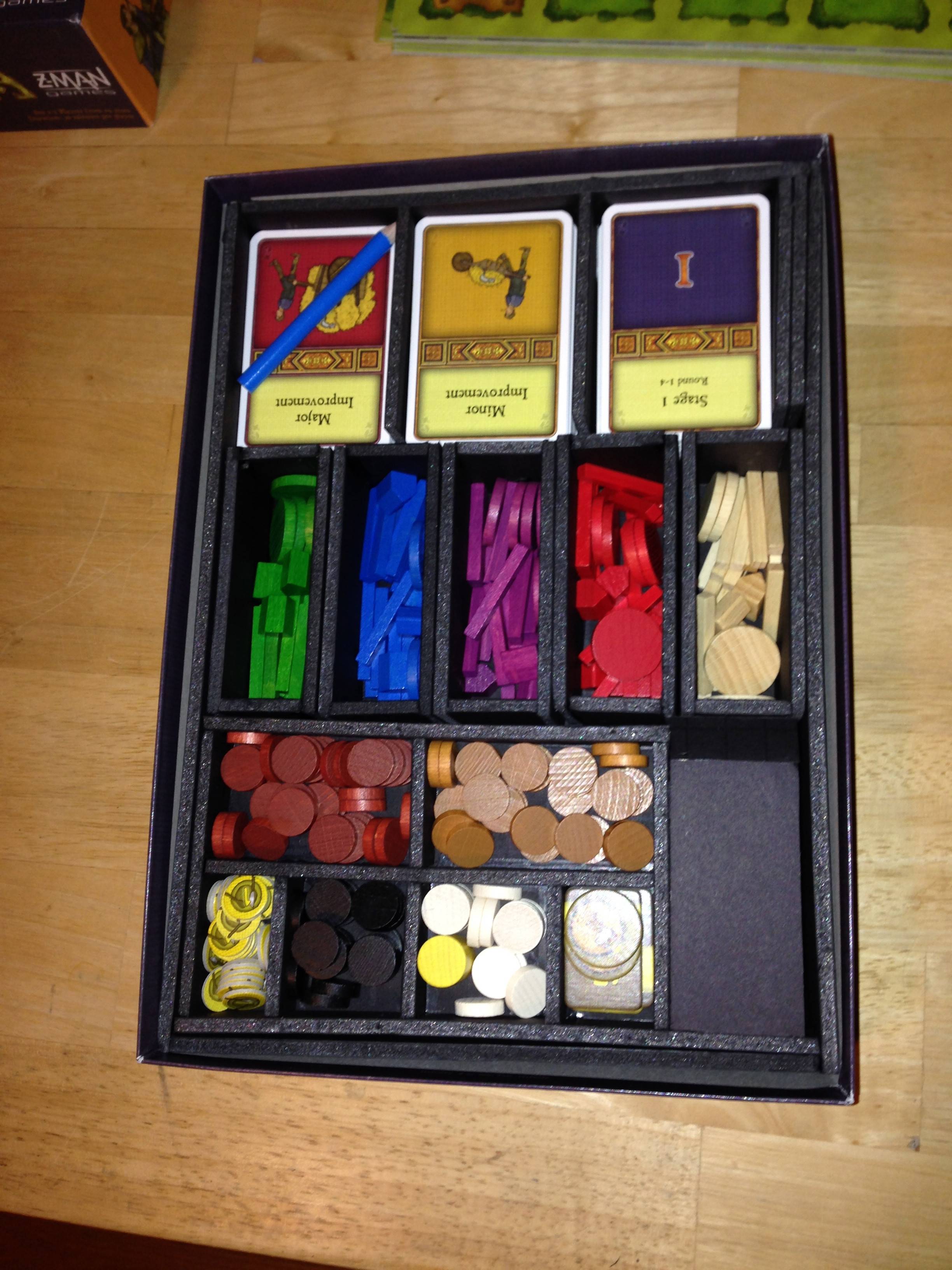 The trade-off is between setup time and maintenance (restocking at the beginning of each turn). We've chosen to split the difference as follows:

We don't bother to sort out the occupations by number of players; after dealing, people check for invalid cards, return them, and get dealt replacements. Iterate until done.

When we play we use all of the series together; if you want to play with, e.g., only the K-cards, I suggest the same approach as for occupations.

I haven't timed our setup, but it's never triggered the "ugh, this is taking too long" reaction. I think our Agricola setup is comparable to our Puerto Rico setup, for what that's worth.

A "Plano box" did it for me. You'll find these for general organization across a lot of specific disciplines, primarily arts and crafts but also fishing and home improvement. Any big-box department store should have a respectable selection, as does Amazon.

I count 10 different resource types in the base game (including animals), but some are more plentiful than others, so either a box with movable dividers, or one with up to 16 fixed-size slots, should do the trick. It has to be relatively shallow in order to fit in the box without raising the lid, but it wasn't hard for me to find a box of this type that met that criteria. A box whose lid is designed to be easily removed is ideal.

The beauty is that the box can then be used in-game; yes, the back side of one of the player boards is supposed to be a "stockyard" for the varying resource types, but if you're playing with 5 players that's no longer an option, and why bother pouring out all the bits and stacking them in piles when you can just open up a lid ? Then, instead of bagging, simply drop the loose bits into their proper compartments, close the lid and the resource bits are packed. Bag the cards, the player-specific bits, the larger cardboard "chits" for tiles and larger resource counts (which I never use), and throw it all in the box on top of the player and main boards.

As with most games, splitting the pieces into a decent number of small zip lock bags seems to make it work just fine.

I think my copy of Agricola actually came with plenty of bags, but they're really cheap if you need to buy some. (For example, searching for "small ziplock bags" on amazon I found packs of 100 or 1000 for under $10.) You can split it into a bag of animals, a bag of vegetables/grain, a bag for each player's pieces, and so on. The decks can be kept split up either rubber banded or in bags of their own.

If that's not fancy enough for you, you can certainly build yourself a divided box, or find something the right size (look at hobby/craft stores or at places like Target for jewelry storage and such), but I tend to think that's overkill. It takes some effort to make/find something exactly the right size without adding enough bulk that things don't fit as well in the box. (But it can be a fun project if you're into that sort of thing!)

As for fast setup/teardown, as long as everyone you're playing with is helpful, it goes pretty fast; I don't think you really need any special tricks as long as you haven't mixed all the pieces together.

The box of Agricola I got came with about 10 bags which I've been able to use to seperate everything into. What I do, is that I only take things out of the bags when they need to be used, and then start piles of "discarded items" to be re-used during game play.

We also try to keep all the like items near each other so that during clean up it's pretty quick to put the stuff back into their respective bags. Some people get annoyed at me and ask for the bags to be dumped open so they don't have to try to take an item from the bag during game play (But hey that's more time to think!), but I find the easier setup and cleanup worth it.

Not the answer you're looking for? Browse other questions tagged agricola .