I have a question about 4-4 high approach joseki. Everything is clear until move 4. I don't know how to respond if black plays C15 instead of the expected C17 (stone number 5). It leads to the following variation: 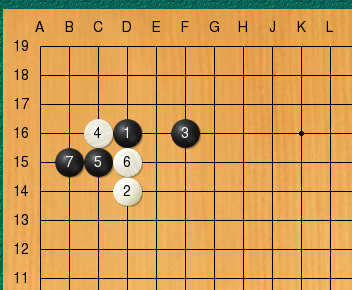 Where I think stone 4 is lost, unless white wants to play D17 which will lead to something like this: 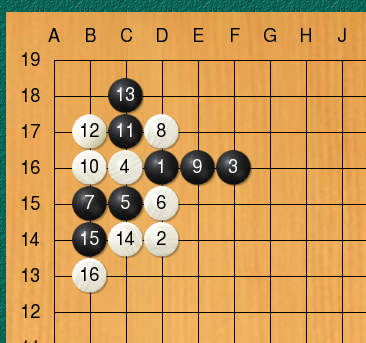 Now black can tenuki, the stone 8 is his, stones 5, 7, 15 are white's. Seems good for white. Is this the best white can play here?

I have never seen Black 5 in any joseki book, but I'm sure I've seen it in my games. Probably a typical amateur mistake :) However, I have no idea why it would be bad - it looks like a reasonable move to me, given the right circumstances.

I will first comment on the sequence you gave, then I will show which alternatives I would consider, and finally I'll show a few sequences I made up. Forgive me for not including diagrams, instead please have a look at the eidogo diagram here.

In your sequence I see 3 problems:

15 (B14) is a minor mistake and should be at B18 in sente to prevent white B18 in sente and give black better shape (F18 is a potentially damaging point after w exchanged B18 for D18).

11 (C17) is a mistake and should be at C13 to jump out and save the 2 stones. Now white has poor shape because of the vital points at B18 and C18 and the very strong black shape at E16. White will probably get a miserable small corner life and black a very thick outside, so the 2 white stones at D15 cannot be moved out without becoming heavy, they should be considered lost.

8 (D17) is a mistake. It forces black to become very solid and leaves an annoying cut at C16. It makes the situation difficult for white.

After C17, black can either continue pressing or jump out to deal with the corner later. If black presses, white will try to capture the 2 black stones, which can be quite tricky. It should end either ko or good for black. Either way black will get the top side and white the left.

If black instead jumps out at C13, black will gain corner and left, white top thickness. Quite good for w in comparison.

Black might also play E15 after E17, which looks really complicated. I guess it will depend on the players' reading skills what happens next, I won't dare to try and analyze this mess.

Finally, white might also just descend at B16. If black jumps out, white will probably play E16 atari and we end up with a similar shape as before.

However, black should probably play B17 tesuji, forcing C17 D17 and either B18 or C18. Either way white is concealed in the corner and not alive yet, so black should have the advantage in the following fight.

Black may consider C14 instead of B15. That move is way above my level to comment on, but I'm sure you can see that it can lead to a complicated mess (not the first one we have seen today).

The unusual move 5 seems possible. Result depends on the board and the fighting skills of the players, both black and white can chose between several routes to follow.

In your shoes, I'd play e16 (atari), Black pulls out to d17, White, e17, threatening to capture two stones, Black c17, you f15 to "capture" the Black stone on f16. But that assumes that the top is the most important part of the board.

If, in fact, the left side is more important, the way you outline is better.

6
Komoku-Oogeima joseki order variation
9
Deviation of 3-3 invasion - how to live/kill?
5
4-4 high approach joseki incomplete?
5
4-4 high approach - why is the defensive approach prefered?
1
Fight - can black stones be killed?
10
In Go, is there any aji left in this corner enclosure (3-5, 4-4, 6-3), and if so, how can it be invaded?
5
What is the meaning of this Joseki continuation?
3
What joseki, if any, yields this position on page 60 of 38 Basic Joseki?
4
What is this alternate cut after 3-3 against double keima round hoshi?
5
Why choose tsuke-nobi after a double keima against hoshi?