Abalone is a 2-player board game. Here's a brief explanation from Wikipedia:

The board consists of 61 circular spaces arranged in a hexagon, five on a side. Each player has 14 marbles that rest in the spaces and are initially arranged as shown below. 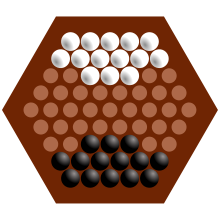 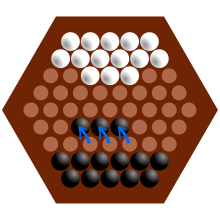 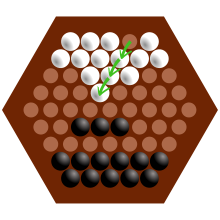 There is only one set of marbles on the board with initial state as in the above picture (it doesn't matter which color you choose). At least how many moves does it takes to migrate all your marbles to your opponent's initial space?

murgatroid99's answer actually shows that at least 30 moves are required. That is, it actually takes a minimum of 88 marble moves to get from the starting position to the ending position, which means it takes at least 88/3 > 29 moves.

If we move all of the marbles from the start position to the end position, the average marble ends up a distance at least 6 from its starting position. In the best case, each move results in 3 marbles each 1 hop closer to their final position. A single side has 14 marbles. Therefore, at least 28 moves are required to move all marbles on one side from their starting positions to their final positions.

Not the answer you're looking for? Browse other questions tagged abalone or ask your own question.