How to approach a game of Othello / Reversi?

I have played the game Othello (Reversi) numerous times but I never approach it with a specific logic or algorithm to apply on each move in my mind. I won many times and lost as much.

How would one approach this game? How would one work in his mind to prune the possible moves and choose the "right" one in each step?

I see that most Othello CPUs more or less "think" the same at each move, how should I think on each move?

I am not speaking as a highly expert player, but rather someone who always wins against people with little or no experience, and against overly simplistic computerized versions. So the approaches I've learned can get you from beginner to intermediate. I'll start with simple stuff first:

Corners are vital. Once you get a corner, it will never change color. More importantly, it is an anchor for getting many more pieces that will never change color. Once you do have a corner, if it's early enough in the game you can simply flip pieces to your color as close as possible to the corner, expanding gradually away from the corner and not doing any other types of moves. None of the pieces can be re-flipped, and eventually your opponent will have so few (or zero) moves that you can control the rest of the game in any way you like.

It's easier to think about avoiding bad moves than making good moves. The worst move that you can make in Othello is to play a piece diagonally adjacent to a corner. Even if the opponent can't immediately seize the corner after that move, it usually takes a turn or two to find a way to get the color flipped along that diagonal in a way that can't be re-flipped on your turn. The turn after that, your opponent gets the corner.

It can be thought of as less risky to go adjacent to a corner horizontally or vertically if you have control of that side. And it may be that for many turns thereafter it will not enable the opponent to get a corner. But unless forced to go adjacent to a corner like this, it's better to avoid it, for 2 reasons. One is that if the opponent does get that corner by other means, he'll then get the entire row you (thought) you controlled. A second, more subtle reason: If your opponent gets a corner on the other side of that row you control, their next move will be to get the corner you're adjacent to. Even if you do get that other corner, your opponent can use that other corner against you, like so (you are black, "controlling" the side with 5 blacks, then you get the corner coming in from another direction):

You can see that white can now take the other corner at any time, and irreversibly control the entire side except the corner on the left. This is what I meant earlier about turning a corner against someone. The only easy way to do this is if they have previously placed a piece adjacent to a corner along that same side.

Many people figure out everything I've written so far after 20-50 games. If you haven't already mastered all of the above, be sure to do so before trying to grasp the more complex and conceptual material to follow.

There are several important concepts that drive Reversi strategy. First, to review the already mentioned concepts:

A simple concept I did not yet mention:

The most important game concept takes a long time to master:

When you are playing someone who has mastered the simpler parts of the game I described above, they will only make moves that allow you to get a corner if they are forced to. The only way you can force them is by limiting the number of moves they can make. You can do that only if you have many moves to make, some of which will not create further moves for your opponent.

I don't expect that most people will fully understand this last part of strategy I described without actually practicing. So I encourage anyone who likes this game to play a few games where your main goal is not to try to win, but to try to get used to making moves that have the result of reducing the number of your opponent's future moves while expanding your own set of moves. Once you get used to this, start trying to win again, using what you've learned to force your opponent to move adjacent to a corner, because that is the only remaining move (or one of a small set of equally bad moves).

One last note: The only player I ever struggled to win against had not played as much Othello as I had. But he was a good Go player. Apparently, Go players learn to think in a way that translates very well to Othello. Perhaps an experienced Go player can leave a comment explaining why a Go player learning Othello will grasp the game far faster than players without that background.

Cluster-borders (or border-lines) is a core concept to win, in my humble opinion, being a decent player:

1. Counter-intuitively, in the beginning of the game, one of the tactics is to take as few pieces as possible. To elaborate on this: in mid game, it's key that you can force the opponent to make bad moves (e.g. giving corners to you). The way to limit the opponent's moves is that he has lots of pieces on the board, in 'border-lines', and you don't.

2. Create border-lines for the opponent. Border-line means the contour of the cluster of pieces on the board. If a border line is all in the opponent's color, he cannot expand in that direction, and you are forcing him to place somewhere else. 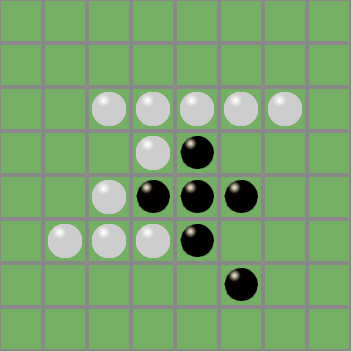 In the picture, white has a border to the left and top. Black should avoid expanding left or upward as much as possible, to limit white options, forcing white to make bad moves towards the lower right.

3. If you have the choice, take pieces inside of the piece-cluster and not on the border-lines. If you break an opponent-colored border-line, you lose advantage.

If you want all the strategy to be simplified into a single sentence, it would be:

Mobility is the number of different moves, in particular good moves, you have access to.

Disks that aren't stable holds no value except for a strategic one. Beginners often makes that mistake of trying to flip as many pieces as possible at each turn. But doing so goes against the principle of maximizing mobility, as the more pieces you flip in one turn, the less mobility you have in the future. The opponent can then use your low mobility to its advantage by forcing you to make poor moves due to how little choices you have left. Don't be that guy.

There's a ton left to learn about Othello strategy, such as traps, interior vs exterior disks, openings and the such, but they're all circumstantial, all subject to exceptions. Just remember those two principles and you'll be on the right track.

6
Othello on a non-square board?
3
Othello (Reversi) Online community
13
How to force the opponent to take the x squares?
18
Is it possible for an Othello / Reversi game to end without the board being filled?
9
Is it possible to fill an Othello/Reversi board with one color?
7
Othello - Most number of legal moves in a given turn
7
What's the least amount of pieces on an Othello board where black or white can't make a move?
4
In reversi, can you overwrite two chips in one move?