Where can I find a chart or diagram explaining Magic's turn structure?

I'm looking for a turn structure diagram for Magic the Gathering to use for teaching new players. There is a lot of information to keep track of in the turn: there is everything from the fact that the Upkeep Step comes before the Draw Step to when you can play abilities between the game actions of the Combat Phase.

For new players in particular, a graphical representation is particularly useful since I want them to gain an intuitive grasp of how the turn progresses as well as be able to reference particular details that become relevant.

I have seen charts that list the steps and phases in order but I need something more than that for teaching and reference. Where can I find a chart that includes the order of steps/phases, when you can use various types of cards and abilities, and what game actions happen when?

magic-the-gathering teaching
Share
Improve this question
edited May 9, 2017 at 2:24

Here is one I made: 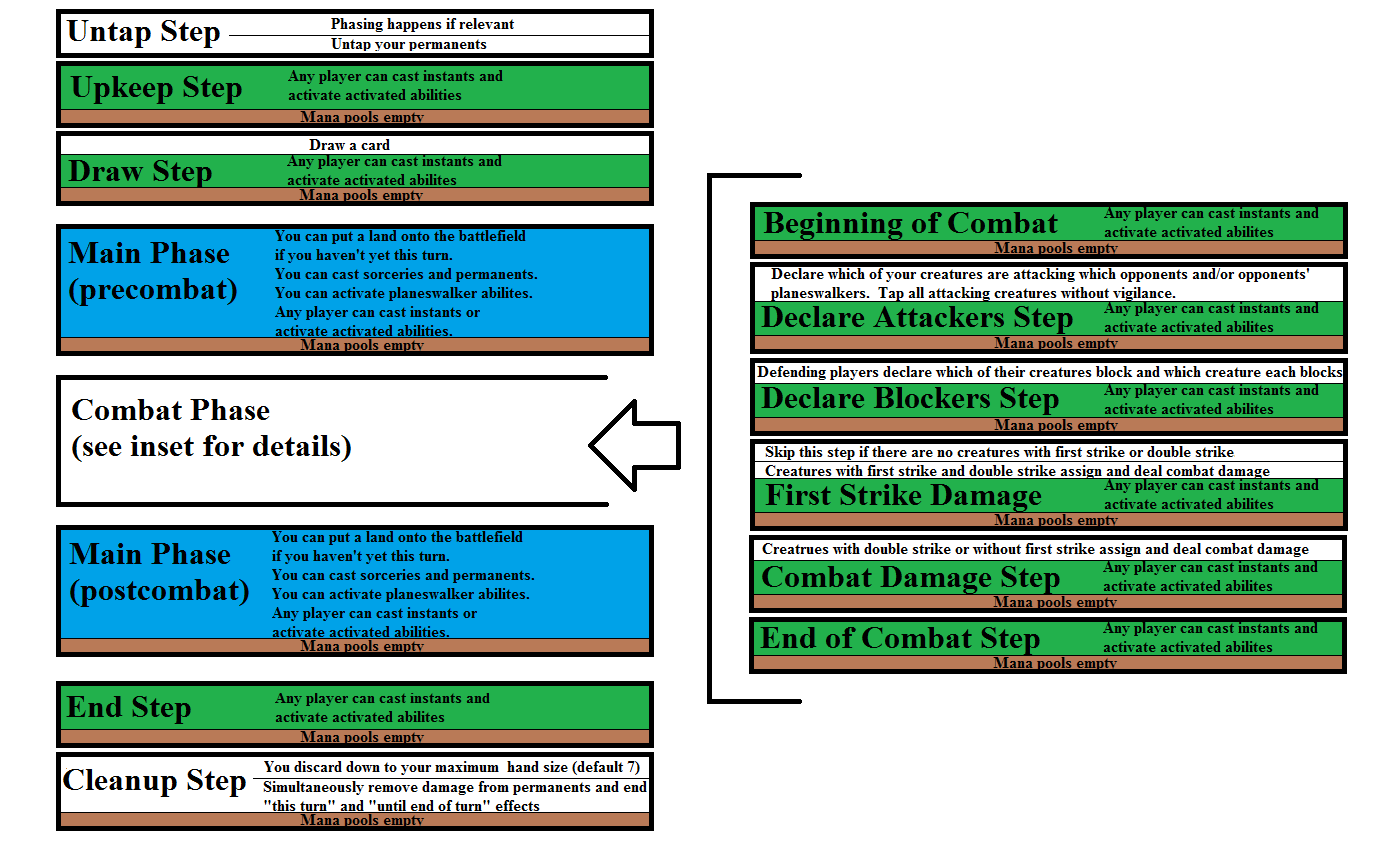 I created a git hub page for this topic. Its a summary of the turn structure from official rules listed on wizard.com. it covers both: basic rules and comprehensive rules in an overview table.

[End Phase]
[[End of Turn Step] End of turn triggers on the stack, then Priority
[[Clean Up Step] Until end of turn things end, active player discards down to 7 cards, state based effects are resolved. If anything has triggered: Priority and repeat this step.

I wanted a chart that is legible when printed, so I came up with the following:

Disclaimer: this chart is based on the old rules, and so the particulars are very incorrect. But If someone is interested in enumerating the issues, I will update the chart. Consider editing my answer with a list of errata at the bottom.

I found this chart that has a lot of detail - I copy-pasted it into excel and tweaked the formatting a bit because I wanted to print it. I also added the mana pool emptying to it, based on @Zaga's. 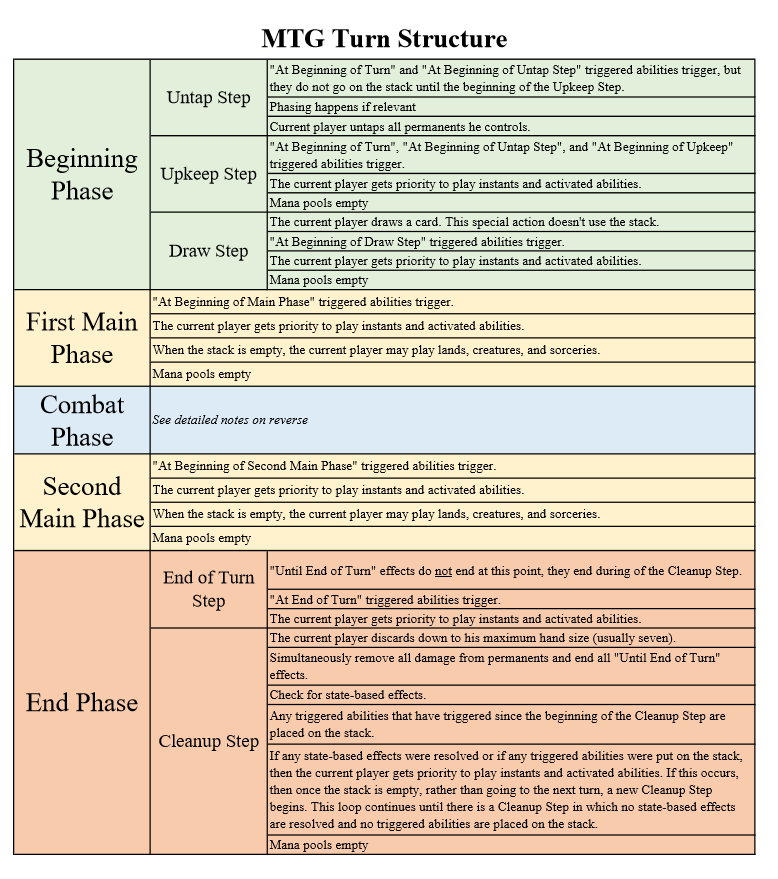 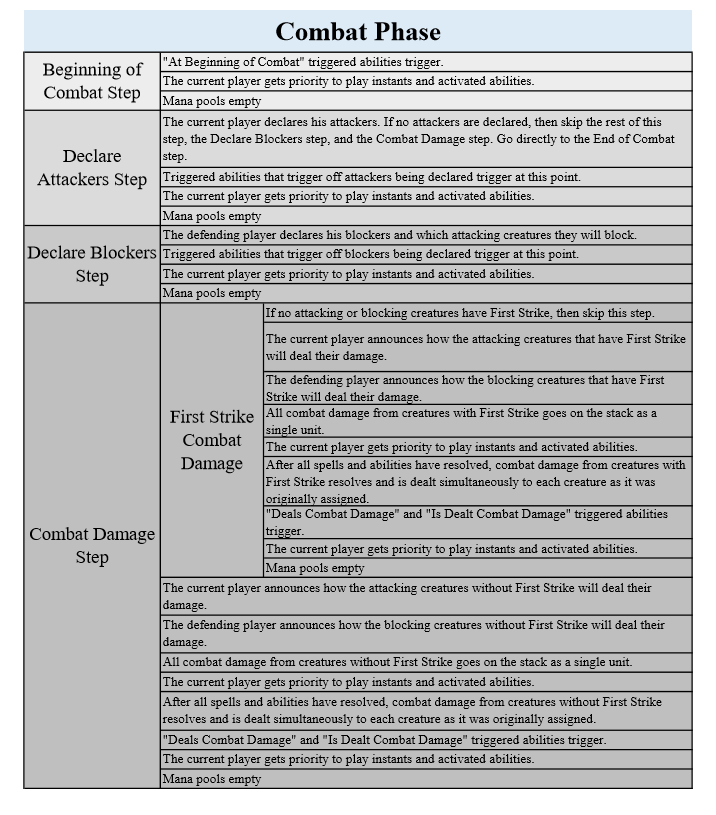 But, as pointed out in the comments, the rules here are out of date.

Not the answer you're looking for? Browse other questions tagged magic-the-gathering teaching .

27
Ways to handicap in Magic the Gathering?
23
What is the difference between lands and mana?
3
What can be played during an opponents turn?
4
Does the effect of an instant supersede first strike damage from a creature?
9
When exactly does an attacking creature become tapped?
6
Can Yahenni become indestructible after taking lethal damage, and does it die then?
8
Does a tapped or removed attacking creature still deal its damage?
3
When can I cast spells?
3
Is it still possible to assign combat damage, and return the creature back to its owner's hand?
2
Can I cast spells right before the end of my opponent's second main phase?
See more linked questions

34
What order do triggered abilities happen in if multiple things trigger at the same time?
1
Voracious Wurm and Wall of Reverence: which trigger happens first?
10
When can lands be tapped?
27
Does priority matter in Magic?
3
Missed triggers in two-headed giant
7
How does Hour of Devastation's Neheb the Eternal work with extra combat & main phases?
7
Killing a Fatespinner during my turn - do I still have to skip chosen phases?
13
What is the reason for cards stating "Until end of turn, you don't lose this mana as steps and phases end"?
7
Can this sequence of events cause a commander to be permanently phased out?
4
Will Sigarda, Host of Herons and Armor of Thorns cause infinite cleanup steps?