So, I'm getting my feet wet with Peasant Magic, and wanted to know what exactly Mishra's Factory counts as in terms of rarity.

For those who don't know, Peasant is an inofficial constructed format allowing cards from all expansions - the only limitations are that you aren't allowed to use rares, and your deck may only contain a maximum of 5 uncommons. If it was ever printed as uncommon or common, you can bring it along.

Now, there's this card called Mishra's Factory that I'm really fond of, and that I'd like to include in my deck. Mishra's Factory is listed as uncommon, and as such can be used. So far, so good.

The rarity of one of its alternative-art prints is listed not as (U1), but as (C1) instead - which is weird because they're from the same set, and any later reprint too is listed as uncommon. 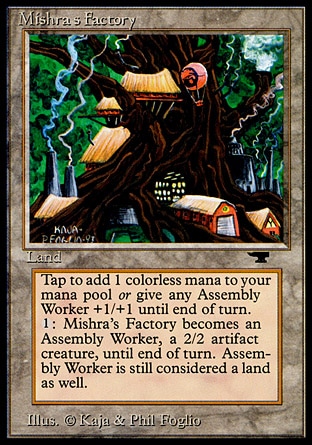 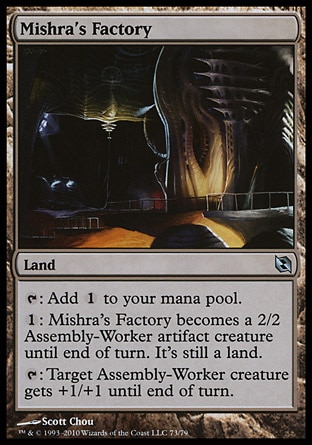 Now, here's my question: Is this particular old print in fact common? And as a consequence, does that mean I may freely run a full playset of Factories in Pearsant (or Pauper, even) without using up my uncommon slots on them?

If anyone could clear this up a bit, they'd be more than welcome.

C1 means it is an Uncommon even though it was printed on the Common sheet.

Back when Antiquities was printed they only had 2 printing sheets, an Uncommon sheet and a Common sheet, then on each sheet there was a variable number of each card printed to create its rarity. This designation of rarity is written like U1 or C4, denoting one copy on the Uncommon sheet and 4 copies on the Common sheet respectively. U1 cards are considered Rares, U3 and C1 cards have the same rarity and are considered Uncommons, C4 cards are Commons, U2 and C2 cards are a little weird and seem to get classified as Uncommons even though they are actually more rare/common respectively. (Source)

When in doubt you can always check Gatherer. As you can see it considers 3 of the arts to be Rare (since they were printed at U1) and one of them to be Uncommon (because it was printed at C1)

I would recommend using http://magiccards.info/ for rarity, as gatherer has some of the cards mislabeled (or labeled as multiple rarities). Other than that, it's probably wise to use the latest printed version of the card (which in this case is uncommon).

But it entirely depends on what your playgroup agrees upon, since the format is not officially supported by WOTC, and events are most likely not sanctoined as such.

7
How do Humility and Mishra's Factory interact?