I don't understand Strength of the Tajuru. What does multikicker mean, and how would I use it in a game?

First, in order to understand how Multikicker works you have to understand how Kicker works. What Kicker {cost} means is that when you cast the spell (before you do anything like choose targets or determine cost) you decide if you are going to 'kick' the spell, if you do you pay {cost} in addition to any other costs of the spell, and it will have a different effect if it was kicked. For example Ardent Soldier has Kicker {2} and If Ardent Soldier was kicked, it enters the battlefield with a +1/+1 counter on it. So when you cast the Soldier if you pay an additional {2} it will enter the battlefield with a +1/+1 counter. Normally you can only kick a spell once, but what Multikicker allows you to do is kick the spell as many times as you can pay for.

Strength of the Tajuru can be a little confusing since it has an {X} in its cost in addition to the Multikicker. How it will work is you decide how many counters you want to place on each creature, this value will be the {X} in the cost, then you decide how many creatures you want to target, the first one is free every additional one cost {1} from the Multikicker. So your final cost would come out to {X}{# of targets - 1}{G}{G}.

From the Gatherer Rulings:

Strength of the Tajuru is probably the most complicated of the multikicker cards, most of them are much simpler, take for example Apex Hawks. The Hawks have Multikicker {1}{W} and Apex Hawks enters the battlefield with a +1/+1 counter on it for each time it was kicked., what this means is as you cast the Hawks you can pay {1}{W} as many times as you want in addition to the regular cost of the spell, and for every time you do that it gets a +1/+1 counter. So if you payed {3}{W}{W}{W} for the Multikicker it would enter the battlefield with 3 +1/+1 counters.

In case you were confused, the X in Strength of the Tajuru's cost is unrelated to multikicker. If you need help understanding that mechanic, see What does X mean in a spell's cost?. Now, to understand Multikicker, it helps to understand Kicker first. 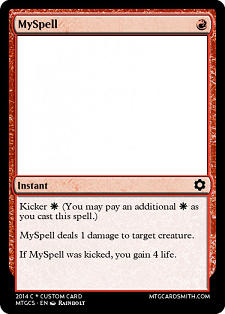 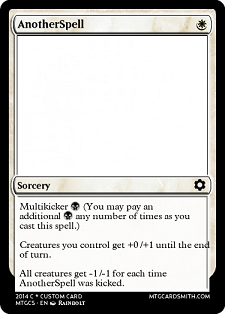 4
What does X mean in a spell's cost?