What does “cannot be countered” mean in MTG?

Mistcutter Hydra says it "cannot be countered." What does that mean? Is it like saying that it cannot be blocked? Or it can not be stopped from being summoned this turn or what? I have no idea what this means.

Cannot be countered means that your opponent(s) will not be able to counter this spell. In other words: this spell will hit the battlefield no matter what(except for a very few very rare cases described in the edit).

If a card doesn't have Cannot be countered text, then a simple Counterspell can counter this spell, so that it will end up in graveyard instead of the battlefield

As diego mentioned in the comment, there are some very rare cases when Cannot be countered can still get "countered"(even though it will not be countered as per definition(rule 701.5a), it can be returned back to the hand/exiled before it resolves). A couple examples would be Mindbreak Trap and Venser, Shaper Savant.

If a spell is exiled, it's removed from the stack and thus will not resolve. The spell isn't countered; it just no longer exists. This works on spells that can't be countered, such as Terra Stomper.

If a spell is returned to its owner's hand, it's removed from the stack and thus will not resolve. The spell isn't countered; it just no longer exists.

So with these 2 cards your opponent may actually "counter"(read: prevent spell from resolving) your cannot be countered spells.

To counter a spell or ability means to cancel it, removing it from the stack. It doesn’t resolve and none of its effects occur. A countered spell is put into its owner’s graveyard.

It means you can't counter it using a card like Cancel or Nullify: 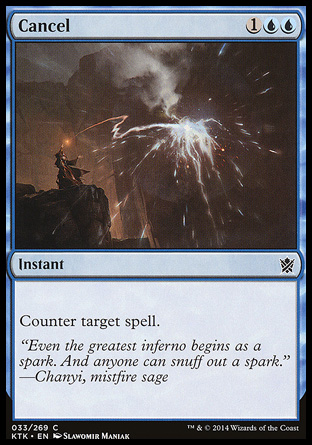 It can still be blocked and everything else. For an explanation of how Countering works, I suggest you read here: How does "Counter target spell" work?

"Counter" is a keyword action, which is to say a verb with a specific meaning to the game. To counter a spell, one moves it from the stack to the graveyard. Cancel is one example of its use.

To counter a spell or ability means to cancel it. When a spell is countered, it doesn't resolve; it is removed from the stack with no effect, and the card is put into its owner's graveyard. Note that "counter" does not apply to permanents, and therefore doesn't remove anything from the battlefield or prevent creatures from attacking or blocking. Only spells and abilities on the stack can be countered.

Note that a spell with "this spell can't be countered" is technically a legal target for "counter target spell". It only means that effects that would counter the spell will do nothing instead. This means that you can still cast a spell with "counter target spell" even if the target can't be countered, and any additional effects not contingent on that spell being countered, e.g. "you gain 3 life" (Absorb) will still apply. Effects that are contingent upon that spell being countered will say so, typically with "If that spell is countered this way...".

Likewise, if you cast a spell A with "counter target spell" targeting another spell B while it could still be countered, but spell B can no longer be countered by the time spell A would resolve (e.g. as a result of Vexing Shusher's ability), spell A will still resolve even if it has no other targets. The fact that spell B can't be countered doesn't make it an illegal target for spell A, and any additional effects from spell A that don't depend on spell B being countered will still occur.

11
What does protection from [quality] do?
13
What can I do about uncounterable spells?

12
What does, “It can't be regenerated” mean?
1
Is a 'Can't be countered' ability the same as 'protection From' or 'Can't be targeted?'
4
What does “removed from the game” mean?
3
What does “Return (card of the same name) from graveyard” mean?
1
Does untapping lands trigger Wake Thrasher's ability?
10
Split Second or Can not Be Countered
3
What does “until end of turn” mean?
6
Change in “can't be countered” wording
11
What spells can be countered?