Unnatural Axe Santa vs. Elf and the Mummy card

In an epic Munchkin game with the Unnatural Axe extension, we had an Elf player encounter Santa. Santa is normally a level 9 monster, but that changes by -5 because Santa trusts Elves. Silly Santa.

That player was doing way to well, so someone added Mommy to the fight. Mommy can only be played on a monster of Level 5 or below, or one that is a Baby. We reckoned that since Santa was now a Level 4 monster against Elves, this card could be applied! Mommy adds another monster of the same kind but 10 levels higher.

The poor victim Elf player complained loudly in proper Munchkin fashion, but conceded that our interpretation of the cards was probably allowed.

Was our interpretation correct, and was Mommy playable here? We were going by Santa dropping down 5 levels for Elves here, but perhaps it should not have been allowed because normally Santa is Level 8 instead.

In case you feel sorry for that player, they survived (having slain a monster without help to get of Santa's naughty list) to end up with this hand about two rounds before winning, utterly unstoppable: 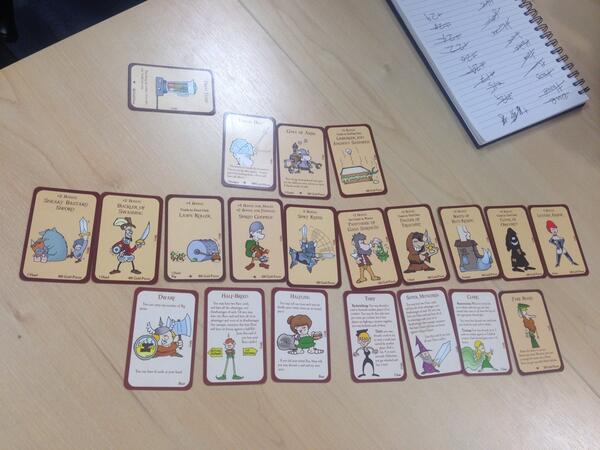 Though there are some cards that specifically state "Adds X to Monsters Level", the Race/Class bonus/penalty is not one of those.

Not the answer you're looking for? Browse other questions tagged munchkin or ask your own question.

18
Is there a mis-print on the Grabby Guts card?
8
Can you use the Annihilation card on a Giant Skunk that someone else is fighting?
4
Munchkin: card attributes in the event of helping another player
19
What's behind the "Duck of Doom" card?
10
Can you interfere and help and win the game as an elf in munchkin?
6
What´s the reasoning for carry and equip items in Munchkin?
2
What happens when Annihilation is played in combat on a monster that is not the last played card?
5
Are the Munchkin original and Munchkin Guest Artist Editions identical?
2
Can a player use the Wand of Dowsing card during a combat which is not his?