Looking for a really dizzying boardgame

I think it was a game made by a German game maker. It was a 2 or 3 player game played on a round board, consisting of 6 concentric circles and connecting lines and spirals. The goal of the game was to create certain combinations of stones, by which you could capture stones of your opponent.

Because you were constantly looking around circles and spirals, you just became dizzy, something you didn't notice while playing, but you noticed when you stood up...

I would like to buy this game , but I don't know the name.

This sounds like a variant of circular chess. There is a 1993 board game under the name of Noble Celts that comes close to your description. (There are 8 concentric circles instead of 6.) Here's the board: 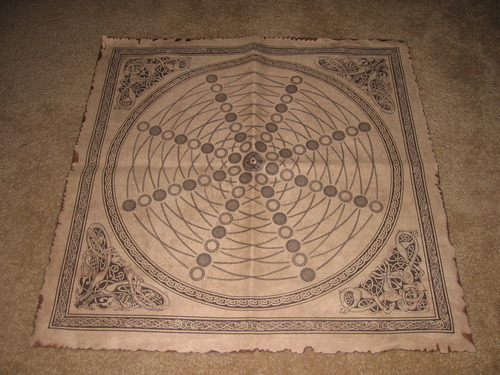 11
Looking for the name of a 2d6 game
4
Looking for a horror boardgame I used to play back in 1999 or so
2
Looking for a board game
4
Help identify card game with teams and secret signals?
9
Looking for name of very old board-type game
5
What is the name of this board game?
4
Simplistic Area Control Board Game with Discs
1
Michigan Rummy? Incorrect Name?