Playing against underestimated player damages my rank at KGS

At GoKGS.com, I (13 kyu) was playing against player ranked as "13k?", and I lost and dropped to 14 kyu. But then we found out (thanks to another user watching the match) that the user is actually much stronger, around 6-8k: 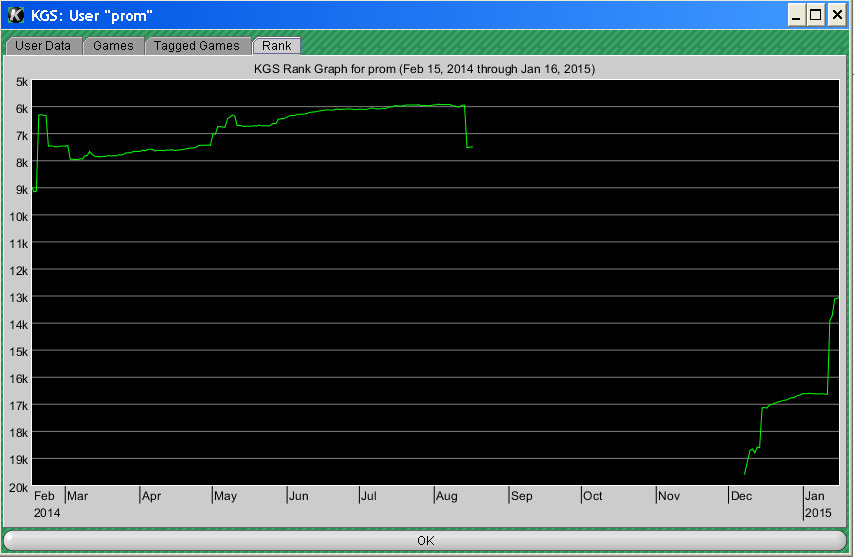 So I actually lost an even game to 6-8k, which is perfectly fine for my rank so my shouldn't drop!!!

Your first question is largely answered by my answer to your other post. You lost a game to another player, whose rank was maybe the same as yours, maybe not, and that has to decrease your rating a little bit - in this case it was enough to cause you to drop (maybe you were close to the boundary between ranks, who knows).

And it's all based on current rank, not past rank. The system can't pretend they're 6k just because they used to be. (Although it could be a sign they're trying to cheat, and they might want to boot the user - but in terms of the rating system, there's not really any alternative to using the current rank.) Using the current rank seems pretty fair; imagine a different case, where you won against someone rated 6k who used to be 13k. You'd be pretty mad if it pretended they were 13k, right?

The answer to your second question is yes, your rank will be updated if the system realizes that the other player was stronger. This is mentioned in the FAQ on their site:

When are the rank graphs updated?

Ranks are recalculated frequently, but the graphs change only once a day at 0:00 GMT.

Why does my rank graph change when I haven't even played any games in awhile?

The rank of one or more of your past opponents changed.

So bottom line, don't worry about it. Presumably they'll turn out to be good and your rating loss from this game will decrease. And if they forgot everything in that 3-month break and really aren't as good anymore, well, you lost to someone close to your skill level, and the rating system gave you what you deserved.

There is no way to know your opponent's strength based on the information you posted.

KGS adds the question mark to alert you about an unreliable rating, because that account has played too few games.

Another clue is the graph itself. Important variations like this are typical of accounts with few games.

Maybe that person only played one game in February 2014, and his opponent lost on time? Who knows...

Not the answer you're looking for? Browse other questions tagged go kgs rank or ask your own question.

-1
Trying to understand KGS ranking system: why did my rank drop?

19
Why is this corner enclosure considered to be safe against 3-3 invasion?
10
What is the formula of rank difference to handicap stones?
6
How can I quickly estimate my level in go by playing against a computer/tablet?
8
Is there a site to play Go online against a computer?
5
How to run strong Go (baduk) playing program locally?
8
By how many points did alphago win against Lee Se-dol?
2
Corner enclosure after playing star point
4
What is this alternate cut after 3-3 against double keima round hoshi?
5
Why choose tsuke-nobi after a double keima against hoshi?