Thud! - Can the Trolls win?

In every game of Thud! that I have played, the Dwarves win hands down.

It is somewhat off-putting as whoever is playing the Trolls seems to have to simply minimise the losses.

Are there any opening gambits that allow the Trolls at least a fighting chance? The instructions imply that there are, but don't give any hint as to what they are.

I have found that it is possible for Troll to actually play a strong game, however, there is a fundamental issue with seeing that one could win with either the trolls or dwarves.

Remember, Thud! is an asymmetrical game--and in actuality a complete game comprises of what more closely resembles a "match"--a player plays one game as as each and the remaining value of the pieces are summed to determine the winner.

Thus, if you find your games really only feel like loss-minimizing--and lack strategy--the same applies to your opponent on his turn.

There isn't a lot of openly available games downloadable for analysis for Thud! as it is rather unpopular, but I'm basing this on my own personal play vs a computer opponent that I myself have designed: Thudgame on github. While the AI itself isn't an infalliable player, you might find that the Troll AI can often be quite threatening and I believe there's much that can be learned from it.

Unfortunately, there's not much depth to the openings (the board is symmetrical). Some common openings I see the Trolls winning with are pretty much one of these two moves: 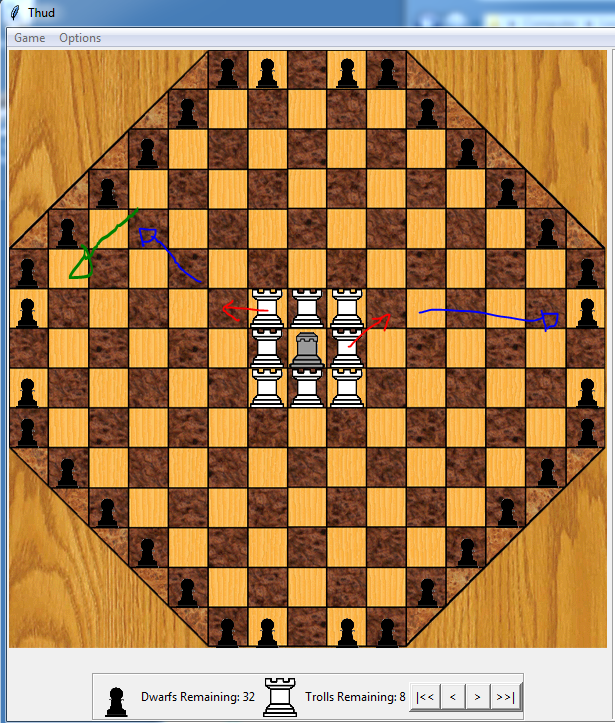 It's not always the same trolls, but you choose your attack vector based on the initial dwarf move (whether you want to hit the dwarf-swarm or the side dwarves are neglecting).

There's a system in how well you can get a single troll to defeat far more than his own value (5 dwarfs per troll is winning), but I have a hard time generalizing it. Give the bot a shot and I think you'll see some winning patterns emerge.

The general consensus is that the game is remarkably well-balanced, but that your strategies develop as you do. It doesn't have to be perfectly balanced, since it's a game of two halves.

Initially, when you are new to the game, the trolls just swamp the dwarves.

Then, you learn how to make blocks, and the dwarves swamp the trolls. This seems to be the stage you are at.

Then you learn trollish aggression, and when and where to make the sacrifices as a troll to stop blocks building and to spread out the trolls, and all that's left is mopping up the dwarves that are left because there's no way they can make a block once you've got the trolls spread out... if you're fast enough.

Then you learn to make dwarvish feints to get the trolls to spread out in the wrong direction first, learn the triangle of death to kill them as they come in with minimal losses, and you're back to swamping the trolls... most of the time.

Then you get the right pacing to strike out to prevent blocks building anywhere, you appreciate that the diagonals are often better paths to tackle because they are closer in terms of shoving, you learn to never, ever retreat, and the trolls once again have the edge... just.

The thudgame.com forums are sadly dead, and seem unlikely to be resurrected, but you can still find them on https://web.archive.org/web/20081021162429/http://www.thudgame.com/node/183 the search engine won't work there but the forums are fairly easily navigable. The strategy section has a wealth of good info.

The best advice, though, is to play lots of games against lots of people much better than you, and see how they kick your ass with the trolls. You will quickly transition to the next cycle of "how the heck can dwarves possibly ever win?" :)

5
Can I use my Tafl game to play Thud?
0
Thud: Can a dwarf be hurled over a troll onto another troll?