The 2013 version of Pandemic added a new card, the Contingency Planner: 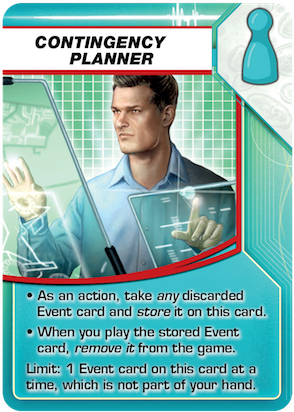 My gaming group has found this card very weak compared to the other roles for a couple of reasons:

This role is one that will not always have the same level of power as others but depending on how the game goes it can easily be the most powerful role in the game. While some of the event cards may not seem as powerful based on the game setup it all depends on how they are used.

Being able to move a player such as the containment specialist to a bad area right before the infection phase or move another player to a research faculty to allow the curing of a disease can be very useful.

Being able to setup the next 6 cards in the infection deck a second time is never bad.

Not always the most useful but even in a game with the operations expert if this role is in the same city as another player who can make the cure then the free research center is very nice.

Need to remember that this role gets its power based on playing all the event cards in a timely manner so that they can all be played again when needed.

I assume that your gaming group typically plays with 4 players. I have found the contingency planner to be much worse with 4 players than with 2. I agree that the contingency planner is the worst role, but part of that is because of how variable his power is depending on how the event cards fall. Throwing him out is a reasonable approach if you only have the base game, but the other option is to buy "On the Brink". It includes a bunch of new event cards, so you switch to playing with 2 event cards in the deck per player (8 with 4 players instead of the usual 5), and I found that this really balanced out the Contingency Planner with the other roles. With a higher number of event cards being drawn (and therefore being put in the discard pile), he has a much longer list of options on a given turn.

We had the same thought and we thought of the following solution:

When the Contingency Planner takes a discarded event card, he has to take one less playing card (not infection) after his turn. This has the benefit of slowing down the game: epidemic cards will be taken later and there will be more turns before all cards run out. Although not a gigantic benefit, it makes the CP on par with the other characters.

Adding "No hand limit" to the card makes it more useful.

15
Do you know any rules that make Pandemic's difficulty more even?
15
Bottom card drawn during epidemic: What happens if there is already more than one disease cube in the city?
7
How many players realistically possible in Pandemic Board Game 2nd edition
6
How to win 2 player Pandemic as Quarantine Specialist and Contingency Planner
5
Pandemic's difficulty seems to rest on the placement of the first epidemic card in the deck
11
pandemic - can a city outbreak more than once per infect city turn?
10
In Pandemic, can the Containment Specialist remove more than 1 cube (without the action of treating) in a cured city?
0
Is the Pandemic expansion “In the Lab” available in multiple languages?
5
Does the “Disease Zones Expand” emergency event only apply to cities with cubes of more than one color?
4
Contingency planner question