What do you do when you get stuck in an Eastern Crows loop?

What do you do when you get caught in an Eastern Crows loop? There are three Eastern Crows cards that get shuffled back into the encounter deck every time they're defeated (supposing none are drawn as shadow effect cards). If you go all the way through the encounter deck you will be left with these cards, and then you're stuck in and endless Eastern Crows loop because you never technically empty the encounter deck so you can't reshuffle the discard pile. If you're playing with Thalin it's even worse, because if he's committed to the quest, then he deals one damage to every enemy as it's dealt. So... Eastern crows comes out > gets dealt one damage > goes back in the deck. But it also has the surge keyword:

So one more card is drawn from the deck, and it's Eastern Crows again... and the cycle starts over again... 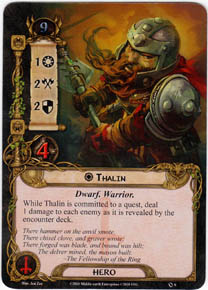 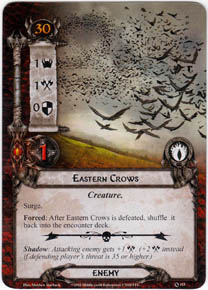 THALIN
Dwarf. Warrior. While Thalin is committed to a quest, deal 1 damage to each enemy as it is revealed by the encounter deck.

EASTERN CROWS
Creature.
Surge.
Forced: After Eastern Crows is defeated, shuffle it back into the encounter deck.

What's the solution here? Do you just play with Eastern crows until the end of the quest?

When an enemy card is revealed from the encounter deck, Thalin’s ability resolves before any keyword or “When Revealed” card effects on the encounter card

Thalin's revealed ability triggers before Surge so Eastern Crows immediately go back into the encounter deck and no surge card is drawn.

As long as the Eastern Crows aren't used as shadow cards, you'll have a pretty easy time with your quest phases for the rest of the game.

Not the answer you're looking for? Browse other questions tagged the-lord-of-the-rings-lcg or ask your own question.

3
When do you progress to the next stage in the Lord of the Ring LCG?
3
When you choose to engage an enemy, do they engage you too?